"We Are Still Here" - Available on UK DVD and Digital, Oct 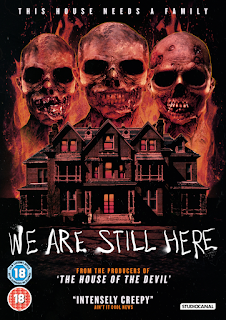 Prepare to be terrified with "We Are Still Here", an old school haunted house story from the producers of "The House of the Devil" and "Cheap Thrills".
In 1979, after the tragic death of their son Bobby in a car accident, Anne (Barbara Crampton) and Paul (Andrew Sensenig) have decided to move to a new home in rural New England in the hopes that it will bring them some closure.
Paul especially hopes that it will be therapeutic for Anne, as the death has hit her particularly hard and caused her to spiral into a deep depression. However almost as soon as they arrive Anne claims that Bobby's spirit is present in the house and she goes so far as to enlist the help of her friend May (Lisa Marie), a self-professed psychic, and her hippie husband Jacob (Larry Fessenden) in order to make contact with him.
As strange events begin to occur in the house, Anne and Paul's neighbours begin to hint that the house has a dark past that has claimed the lives of several others.
A horror in the tradition of Italian auteurs such as Lucio Fulci, it was one of the breakout hits of this year’s FrightFest and will also be screening at this year’s Grimmfest, 2nd - 4th October at Odeon Printworks in Manchester.

Extras on the disc include an Audio Commentary Track and a Behind the Scenes feature.

The film is available on Digital 12th October and DVD 19th October 2015.