Cast announced for 2:22 A GHOST STORY at the Lyric Theatre, January

The current cast at the Criterion Theatre will perform until 8th January 2023, with the new cast taking over at the Lyric Theatre from 21st January - 23 April 2023.

Moving from the Criterion to the Lyric, the show’s biggest house to date, the transfer follows a record breaking run at the Noel Coward before moving to the Gielgud Theatres followed by two hugely successful runs, including with the current cast, at the Criterion Theatre, plus three Olivier Nominations including Best New Play, and winning the Best New Play category in the Whatsonstage awards.

Cheryl (who will play Jenny) said: 'I am really excited to be taking part in what is such a new challenge for me. I have always loved and been a big fan of theatre so I’m especially excited to be playing the role of Jenny in this production of 2:22. It is a brilliant role and subject matter with a very interesting plot! Danny Robins is such an intriguing character which is evident throughout this play and his style of writing has an odd sense of familiarity to me, being a fellow Geordie! I look forward to working with Matthew and the other cast members and can’t wait to get going.’

Hugo Chegwin (who will play Ben) said: ‘I am so appreciative to have been asked to be a part of the next cast of 2.22. It’s a big jump out of my comfort zone but it is going to be amazing.’

Scott Karim (who will play Sam) said: ‘It’s a real treat to be part of a production like 2.22 - A GHOST STORY, that grips and chills all types of theatregoers. I can’t wait to join the exciting new cast and help tell this thrilling story.’

The production began its life in the summer of 2021 at the Noel Coward Theatre starring Lily Allen, Julia Chan, Hadley Fraser and Jake Wood. It then transferred to the Gielgud Theatre for 10 weeks from 4 December 2021. The production there, starring Stephanie Beatriz, James Buckley, Elliot Cowan and Giovanna Fletcher, completed its run on 12 February 2022. The first cast at the Criterion Theatre featured Tom Felton, Mandip Gill, Beatriz Romilly, Sam Swainsbury and the current Criterion Theatre cast Tamsin Carroll as Lauren; Felix Scott as Sam, Matt Willis as Ben and Laura Whitmore as Jenny, ends its run on 8 January.

The US premiere of 2.22 - A GHOST STORY at the Ahmanson Theatre, Los Angeles opened on 29 October and ended its run on 4 December 2022.

2.22 - A GHOST STORY is written by award-winning writer Danny Robins, creator of the hit BBC podcast The Battersea Poltergeist and it is directed by Matthew Dunster. Intriguing, funny and scary, it takes audiences into one adrenaline-fueled night where secrets will emerge and ghosts may appear….What do you believe? And do you dare to discover the truth?

Jenny believes her new home is haunted, but her husband Sam isn’t having any of it. They argue with their first dinner guests, old friend Lauren and her new partner Ben. Can the dead really walk again? Belief and scepticism clash, but something feels strange and frightening, and that something is getting closer, so they are going to stay up… until 2.22am… and then they will know.

2:22 - A Ghost Story
By Danny Robins
Directed by Matthew Dunster

Please check the website for Christmas and New Year schedules which vary. 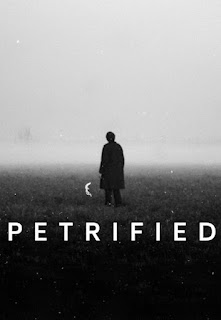 The much-loved Irish horror fiction podcast PETRIFIED has just announced some exciting additions to the cast list for their eagerly anticipated Series 3, which begins on Jan 11th 2023.

Actor Cecil Baldwin, best known for voicing Cecil Palmer in the cult hit podcast Welcome to Night Vale, and New York filmmaker Larry Fessenden, director of films such as Wendigo and The Last Winter and actor in Broken Flowers and Bringing Out the Dead amongst others, are the first American actors to join the cast of the award winning podcast.

Produced by Liam Geraghty and written and directed by Peter Dunne, PETRIFIED tells the chilling tales of ordinary people encountering the supernatural, and their terrifying fates. Series one and two regularly hit the number one position in the Apple Podcast Fiction Charts and garnered fans across the globe.

The anthology series has won numerous accolades at the New York Festivals Radio Awards and the Irish Podcast Awards and was most recently nominated as Best Audio Drama at the Pod Bible Awards. The team created a terrifying experience at their very first live show earlier this year when they were invited to perform at the London Podcast Festival.

Her.ie says PETRIFIED “captures listeners' attention from the get-go, reeling them in for a deeply unsettling ride, before delivering on some serious scares.” CrimeReads.com said “PETRIFIED is extremely well written, expertly produced, and brilliantly acted”.

Listen to Petrified wherever you get your podcasts: https://linktr.ee/Petrified_Pod 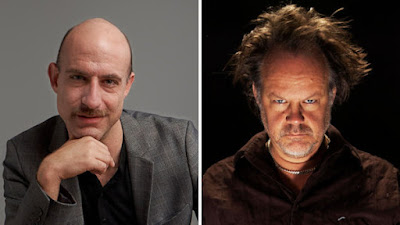 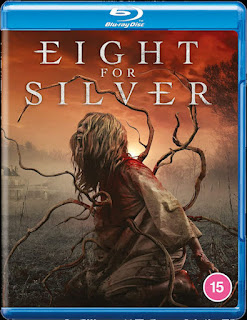 Mediumrare Entertainment announces the fantasy horror EIGHT FOR SILVER is being released on DVD and Blu-ray on 30 January 2023.

Flickering candles, fog, and a ferocious beast in the forest… get ready for a fresh spin on the werewolf film, written and directed by Oscar and Bafta-nominated Sean Ellis (Cashback, Metro Manila).

The film boasts a superb cast, including Boyd Holbrook (The Sandman) and Cannes-winner Kelly Reilly (Yellowstone), in an eerie story about a small town in 19th century France menaced by an ancient curse.

In the late 1800s, a once-peaceful remote country village is under attack - but by who or what, no one knows. Villagers spread rumours of a cursed land, supernatural forces, and even demonic creatures, as the disappearances and killings continue. Pathologist John McBride (Boyd Holbrook) arrives to investigate the danger, only to discover something much deeper and more sinister than he ever could have imagined.

Sumptuously shot, packed with frights and superb special effects, with a mesmerising, spine-tingler of a score, and featuring a scarecrow “that’ll haunt your dreams” (Bloody Disgusting), the film recalls, according to Screen Daily “everything from Hammer to The Innocents, Dracula to creepy country house Gothic horror”.

A creature feature classic for the 21st-century, that The Screen Scene calls “one of the best horror films of the year”, EIGHT FOR SILVER will thrill and delight horror fans who got a kick out of the likes of contemporary horror hits The Witch and Hereditary.

- Behind the Scenes of 'Eight For Silver': An overview of the production, with cast and crew interviews exploring story points, characterization, and the material's approach to werewolf-style horror.
-Trailer

Pre-order the UK BD from Amazon.co.uk.

Pre-order the UK DVD from Amazon.co.uk.

Mystery and Folkore in JANUARY - At Cinemas and Digitally, 27th Jan

Five men caught in a limbo between life and death, past and present, communism and capitalism, known and unknown, try to resolve a mystery, which slowly devours them. 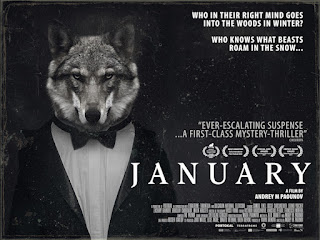 In the middle of nowhere, five men are stuck in a snowstorm. One has to cross the Woods to reach town, but that’s madness in the midst of winter: the wolves are hungry and can be heard howling all night long, and who knows what other creatures roam these woods…?

Inspired by the eponymous play by Nobel Prize Nominee Yordan Radichkov and reinterpreted for world audiences by acclaimed documentary filmmaker Andrey Paounov, January is a bold fiction debut from a director who has made a name by exploring, with a sense of humour, the existential absurdities of the post-socialist state in the language of cinema.

JANUARY is in cinemas and on demand 27 January 2023

From the prolific producers behind Midsommar, Hereditary and The Witch, and directed by rising filmmaker Andrew Semans, RESURRECTION is a gripping psychological thriller, featuring powerhouse performances from Rebecca Hall (Godzilla Vs Kong, Iron Man 3) and Tim Roth (The Hateful Eight, The Incredible Hulk). 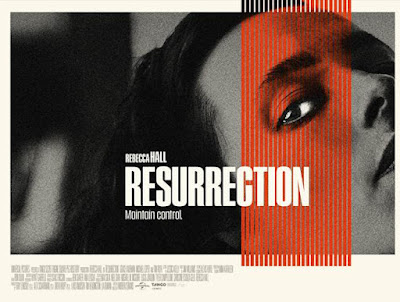 Margaret's (Rebecca Hall) life is in order. She is capable, disciplined, and successful. Soon, her teenage daughter, who Margaret raised by herself, will be going off to a fine university, just as Margaret had intended. Everything is under control. That is, until David (Tim Roth) returns, carrying with him the horrors of Margaret's past.

Eva Green and Mark Strong star in the sinister folk horror NOCEBO. Catch it in UK cinemas from Friday 9 December.

Checkout the UK quad poster and trailer below.

A fashion designer (Eva Green) is suffering from a mysterious illness that puzzles her doctors and frustrates her husband (Mark Strong). Help arrives in the form of Diana, a Filipino carer (Chai Fonacier) who uses traditional folk healing to reveal a horrifying truth.

Key highlights this DECEMBER on the essential, alternative streaming service ARROW include the premiere of a new and exclusive festive horror treat, the Ju-On franchise in one terrifying collection; a selection of nefarious Video Nasties, a gruesome Christmas slasher, and much more... 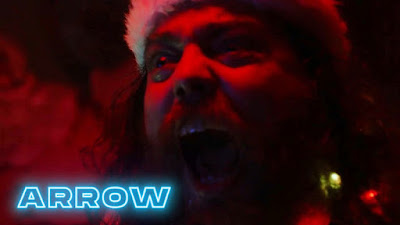 In December ARROW are exclusively showing THE LEECH, a terrifically twisted offering from writer/director Eric Pennycoff (Sadistic Intentions), a Christmas cautionary tale about the perils of opening your door to a stranger.

Also showing in December, dare you watch the terrifying JU-ON films? “Ju-On”: the name given to a deadly curse spawned when someone dies in the grip of a violent rage. All who come into contact with it are doomed...

As well as all that, there’s a fantastic triple bill of Paul Joyce documentaries including the introspective Stanley Kubrick: The Invisible Man, reflective Out of the Blue and Into the Black, and striking observation on Robert De Niro through Quentin Tarantino's contribution in You Talkin' To Me?.

- The Endless
- Out of the Blue and Into the Black