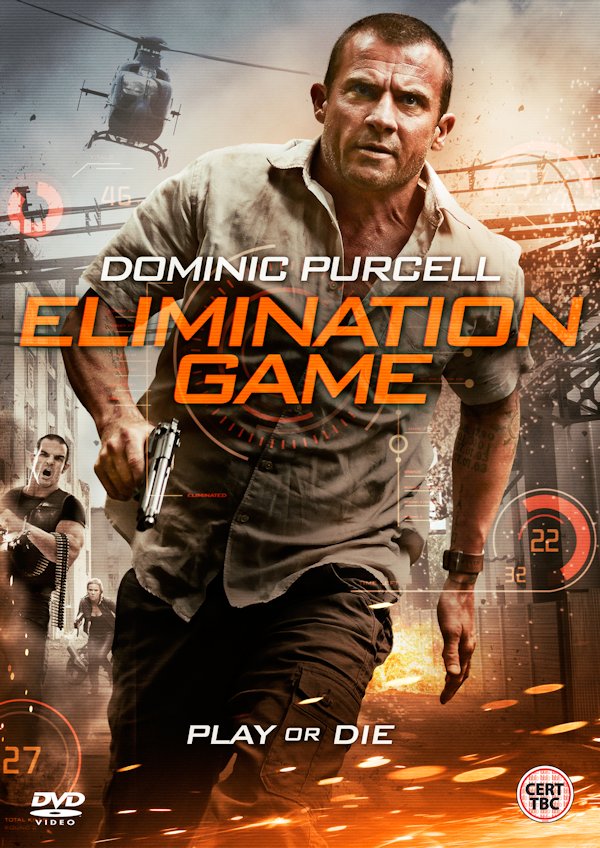 Prison Break star Dominic Purcell finds getting out of prison is the easy part in this film, it’s what he has to do next that’s the hard part, in “The Elimination Game”, which is out on UK DVD October.

Set in the near future, disgraced Navy Seal Rick Tyler (Dominic Purcell – “Blade 3”, TVs “Prison Break) is languishing in a military prison, when he is given an offer he cannot refuse. Rather than face execution, he’s released to appear on a sadistic TV game show called “Turkey Shoot” (sound familiar? It should do), where prisoners have to, quite literally, fight for their freedom.

Dropped into a “game zone”, he has to reach a target within a certain time limit to win his freedom. But preventing him from doing so are a bunch of armed killers, who he has to evade or fight off in order to get there. As the “games” begin, it soon becomes obvious that Rick has been set up to fail. But it seems they’ve never had a contestant like him before and unlike previous entrants, isn’t going to be such an easy target.

A loose remake of the 1982 film “Turkey Shoot” (AKA “Blood Camp Thatcher” and “Escape 2000”) which also mashes in elements of “The Running Man” the film is an entertaining enough, low-budget action movie, which also rather amusingly features the original “Turkey Shoot” on TV during one scene and even features one of the original actors, Roger Ward, in a minor role.
However, what the film was obviously trying so hard to achieve, seemed to be just beyond the reach of its budget. Scenes in the military prison and the hospital all seem to take place in one room, the black cars used for police vehicles didn’t have flashing light bars in them and the actual police chase isn’t really shown, but made of stock dash-cam footage taken from various real life chases. But if you can look past the films low-budget trappings, it still proves to be very entertaining, and benefits greatly from Dominic Purcell’s presence (sharper eyed viewers may also recognise US TV actor Nicholas Hammond, the original TV "Spiderman", as General Thatcher).

The film is released to UK DVD October 12th from Altitude Entertainment and contains a trailer as an extra.