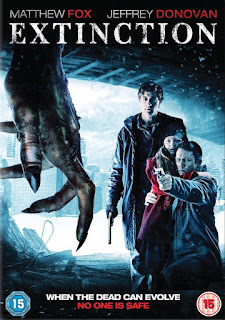 Neighbourly disputes are nothing new, but when the person next door is probably the only other person left alive and you have fallen out with them. How do you continue to survive the in the aftermath of a zombie apocalypse? That is the question posed in director Miguel Angel Viva’s “Extinction” which comes to UK DVD Sept 21.

Set during a very bitter winter, it’s been 9 years since the world was ravaged by a zombie like virus that turned people into blood thirsty mutants. Jack (Jeffrey Donovan – TVs “Burn Notice”) and his daughter Lu (Quinn McColgan - “Non Stop”) and former friend Patrick (Matthew Fox – TVs “Lost”) have survived the carnage by holding up in the remote town of Harmony and are probably the last 3 survivors.

It’s been years since they last saw any mutants, but they still live in fortified properties, stockpiled with guns and ammunition and survive by scavenging food supplies from the other houses. But, the problem is that despite seemingly being the only people left alive, it seems they’ve had a major falling out sometime in the past and no longer talk, despite living right next door to each other.

Sam at least has his daughter for company, whilst Patrick only has his pet dog and a radio, which he constantly broadcasts distress messages on, in the hopes of hearing another voice. But when they discover another survivor, who informs them the mutants have returned, the 2 must put aside their differences if they are going to survive, as the mutants converge and they quickly find themselves under siege….

Owing more than a passing resemblance to “The Omega Man” and “Last Man on Earth” (which were both based on the book “I am legend”) “Extinction” is a compelling zombie/infection movie. The film starts well, showing the films main protagonists barely escaping an attack by the mutants, which have over-run an apparent safe haven, before showing how the 2 former friend’s lives have unravelled over the years in the post apocalyptic world.

Things do however kick back up a gear for the action packed finale, as they are forced to fend of a “Night of the Living Dead” style siege by the creatures who finally over run them.

The disc also comes stacked with a number of special features, most of which look like they might have been filmed for Web/YouTube promos, which include…

Making of (12mins) – a behind the scenes look at the film, featuring interviews with the cast and crew.

The Apocalypse (2:30) – The Director and cast discuss the look and feel of the film

The Creatures (2:30) – A look at how the prosthetic effects for the mutants were achieved.

Digital Effects 1 (2:20) and 2 (2:15), a look at how the CGI effects were overlayed over the filmed footage to give the impression of a desolate town.

Mathew Fox and Jeffrey Donovan (2mins) The lead actors discuss their characters in the film.

Clara Logo and Quinn McColgan (2:10) The lead actresses discuss their characters in the film.

VFX Breakdowns (3:20) – a comparison of the original story board artwork with the finished CGI shots.

The film is also viewable with Italian, German or Turkish audio tracks if the English one isn’t your thing.


Highly recommended for fans of zombie/infection films. The film is released to UK DVD Sept 21 from Sony Pictures Home Entertainment