"The Vatican Tapes" coming to UK Cinemas and Digital 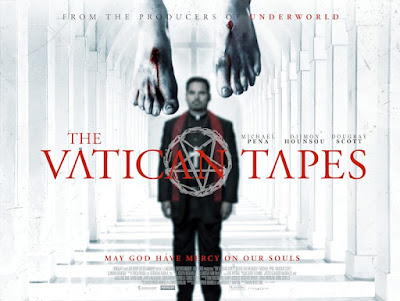 Coming to UK cinemas and Digitally from Signature Entertainment this October. After a young woman (Olivia Taylor Dudley - "The Chernobyl Diaries") begins to express increasingly erratic behavior, her father (Dougray Scott - "Taken 3") and boyfriend (John Patrick Amedori - "Butterfly Effect"), along with a priest Father Lozano (Michael Peña - "End of Watch") and two Vatican exorcists (Djimon Hounsou and Peter Andersson as Cardinal Bruun), come to realize that she's been taken over by an ancient satanic force. It’s all up to Father Lozano to wage war for more than just Angela’s soul, but for the world as we know it..
THE VATICAN TAPES is directed by Mark Neveldine. The story is brought to life by a cast that includes Olivia Taylor Dudley, Michael Peña, Dougray Scott, Djimon Hounsou, Peter Andersson, Kathleen Robertson and Jo

Signature Entertainment Presents The Vatican Tapes at Cinemas and On Demand October 30th. The film will also be shown at the October Frighfest.
View the trailer on YouTube