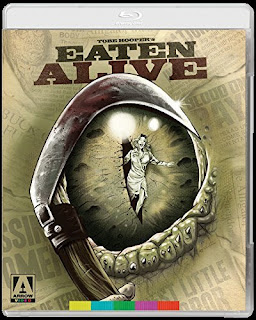 Arrow Video is thrilled to announce the release of "Eaten Alive" (AKA Death Trap), director Tobe Hooper’s grizzly and grimy follow-up film to his genre defining "Texas Chainsaw Massacre". Which is being released in a special edition BD and DVD combo pack to UK video shelves.

Set in the atmospheric Louisiana bayou, Eaten Alive was reputedly inspired by the activities of Texan serial killer Joe Ball and boasts a cast that includes a suitably sleazy performance from Freddy Krueger himself, Robert Englund.
Deep in the Louisiana bayou sits the ramshackle Starlight Hotel, destination of choice for those who like to check in but not check out! Presided over by the bumbling, mumbling Judd (Neville Brand - "Ninth Configuration", "Without Warning") and his pet croc which he keeps in a large pond out front, the patron of this particular establishment may seem like a good-natured ol’ Southern gent – but he has a mean temper on him, and a mighty large scythe to boot…

Originally released in the UK as "Death Trap" and once banned as  a video nasty,"Eaten Alive" matches "Texas Chain Saw Massacre" for sheer insanity – and even draughts in Chain Saw star Marilyn Burns as the terrorised woman-in-peril, alongside William Finley and Mel Ferrer.
Tobe Hooper’s 1977 grindhouse nasty will debut on Blu-ray from 21st September 2015 and comes presented in a brand new 2K transfer of the film and featuring a wealth of special features...