In what has become a highly anticipated annual tradition for The Walking Dead fans the world over, Entertainment One will be releasing "THE WALKING DEAD: THE COMPLETE FIFTH SERIES - Blu-ray Limited Edition" set on December 14th. 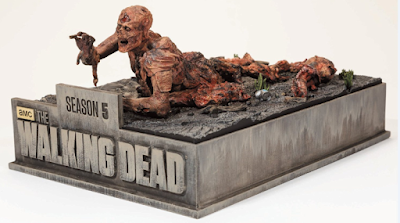 As with previous limited editions, McFarlane Toys has once again created a striking, must-own packaging concept. This year’s Limited Edition features an “asphalt” walker, one of the many unforgettable images that has made the series a global phenomenon. Handsomely crafted and intricately detailed, the figurine is based on the original walker designed by award-winning SFX make-up Supervisor and Executive Producer, GregNicotero.

Previous The Walking Dead Limited Edition releases include the “Governor’s Walker Head Tank” (Series 3) and the “Tree Walker” (Series 4). This Series “Asphalt Walker” edition will be available to order from Monday 16th November exclusively through eOne Direct on Rakuten.co.uk eOne Direct Shop and on eBay
Special features on the set include...
-Deleted Scenes
-Inside “The Walking Dead”
-The Making of “The Walking Dead”
-The Making of Alexandria
-Beth’s Journey
-Bob’s Journey
-Noah’s Journey
-Tyreese’s Journey
-A Day in the Life of Michael Cudlitz
-A Day in the Life of Josh McDermitt
-Rotters in the Flesh