"Bloodsucking Pharoahs in Pittsburgh" - on UK BD and DVD October 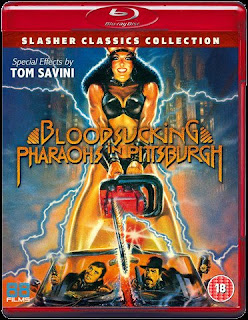 Cult classic "BLOODSUCKING PHARAOHS IN PITTSBURGH" finally makes it's way to UK BD and on DVD this October from 88 films.
In the same satirical spirit as HOLLYWOOD CHAINSAW HOOKERS (1988) or STUDENT BODIES (1981), comes 1991's esoterically entertaining splatter send-up "BLOODSUCKING PHARAOHS IN PITTSBURGH".
Originally entitled PICKING UP THE PIECES, and featuring special effects from the legendary Tom Savini (MANIAC/ DAY OF THE DEAD), this first class mix of gore and guffaws makes its worldwide BluRay debut from 88 Films.
Proving that a madwoman can be far more threatening than a madman, BLOODSUCKING PHARAOHS IN PITTSBURGH introduces us to a weapon-wielding femme-fatale who is dedicated to lopping off limbs and chalking up a high body count in the name of an ancient religious cult. What results is a plethora of slice and dice silliness and one of the most deranged, but darkly humoured, hack 'em ups ever unleashed.
Starring Veronica Hart (the erstwhile adult movie legend from such late night masterworks as AMANDA BY NIGHT (1981) ), as a crazy killer with a shapely shape, and paying homage to everything from BLOOD FEAST (1963) to THE TOOLBOX MURDERS (1978), "BLOODSUCKING PHARAOHS IN PITTSBURGH" proves once and for all that the female of the species is far deadlier than the male!
SPECIAL FEATURES
•BRAND NEW Interview with effects legend Tom Savini
•Animated Stills Gallery
•Behind the Scenes Footage
•Deleted Scenes
•Interview with Dean Tschetter
•Reversible Sleeve
The film is out on UK BD and DVD from October 5th.