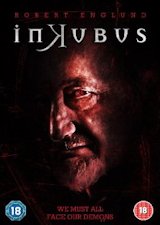 The nice chappies over at Trinity X were kind enough to supply me with a screener copy of the new horror film "Inkubus" to take a look at. Marking the directorial debut of Glenn Ciano, the film stars robert Englund as a serial killer, who just strolls into a police station one night with a severed head in his hands, and proclaims he is the killer known as "Inkubus" that they've been looking for all these years.
But he's no ordinary serial killer, and he's not there to give himelf up, he's there to raise some hell. Also starring William Forsythe (Devil's Rejects - Rob Zombies Halloween) and written by Carl Dupre (who worked on some of the later Hellraiser films) this low budget horror might not be to everyone's taste, which is a kind of cross between "Assault on Precinct 13" and "Candyman", but Robert Englund fans should enjoy it.
The DVD is released to UK video shelves Feb 13 with a trailer as an extra.
Watch the trailer on YouTube
Buy the DVD on Amazon.co.uk
Posted by Dark Angel at 20:39 No comments: 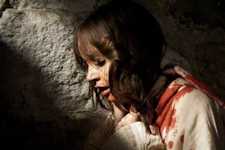 From the director of "THE ROOST" & "CABIN FEVER 2" Ti West, comes slow-brewing, old school psychological horror at its finest, freakiest and most fiendish, "HOUSE OF THE DEVIL", starring veteran genre actor Tom Noonan (ROBOCOP 2, MANHUNTER), which premieres on Friday Feb 17, 22:55 .
Student Samantha has just moved into her own apartment and needs some fast cash for the rent. Answering a campus advert for a babysitter, she ends up at the creepy old remote country home of the strange Ulman couple. But something is clearly wrong. The pay is too high. There seems to be no child. A total lunar eclipse is about to further darken the night skies. And Samantha’s blood-freezing satanic panic begins…
Ti West will also be presenting a director’s night on Thurs 23 Feb from 21:00, introducing his three favourite horror films. His picks? Creepshow 11, The Evil Dead and Twin Peaks: Fire Walk With Me
TV: Sky 319 / Virgin 149 / Freesat 138
www.horrorchannel.co.uk/ | twitter.com/horror_channel
Posted by Dark Angel at 16:30 No comments:

The UK’s favourite horror fantasy festival returns to its second home at the Glasgow Film Festival for the 7th year with its biggest line-up ever.

From Friday Feb 24 to Saturday Feb 25, Film4 FrightFest will be screening eleven new must-see genre titles. ten of which are UK premieres. So expect to be taken of the roller-coaster ride from hell with this ghoulish global celluloid feast, featuring Argentinean demons, flesh-hungry Russian zombies, mutant cannibals, a Chinese-speaking alien, Asia’s deadliest killers, a Croatian hit-man, Pinocchio obsessed psychos and Jack Nicholson like you’ve never seen him before.

With guest directors and filmmakers from all over world (to be announced shortly), surprises on screen and off, and our unique community feeling, FrightFest at the GFF has now become a must-attend occasion on the horror fantasy fan's calendar.
Alan Jones, FrightFest’s co-director said: “Film4 FrightFest is thrilled to be part of the Glasgow Film Festival for its seventh and biggest year. We’ll be showing eleven fantastic premieres, previews and special events to shock, thrill and amaze over two days - plus those must-meet guests from all corners of the genre.  So, be part of the best community spirit in the country while watching the best fright stuff currently on offer. There couldn’t be a better way to delve into 2012 and ready yourselves for FrightFest the 13th in August”
The Films are listed as follows...
FRI 24
13:30 CORMAN’S WORLD: EXPLOITS OF A HOLLYWOOD REBEL
16:00 TAPE 407: THE MESA RESERVE INCIDENT
18:30 CRAWL
21:00 THE DAY
23:15 WAR OF THE DEAD


Visit the official website at http://www.entertheunderworld.com/
Posted by Dark Angel at 11:49 No comments:

The Watermen - A chiller to shiver your timbers. 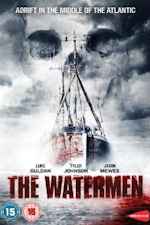 Coming to UK DVD, a group of hot, rich, young things led by the dynamic Trailor (Jason Mewes – Clerks, Mallrats, Jay and Silent Bob Strike Back) set out for a deep-sea fishing trip on a million-dollar yacht, but soon their fun turns into disaster when a fire damages their engine and they find themselves marooned in the middle of the ocean.
Spotting a ship on the horizon they alert them to their distress and are rescued, but the crew aren’t what they first seem and the dream trip turns into a nightmare as they fight for survival against the merciless clutches of The Watermen.
The Watermen will be making waves on UK DVD on 27 February 2012.
View the trailer on You Tube
Buy the DVD from Amazon.co.uk
Posted by Dark Angel at 19:12 No comments:

ANCHOR BAY TO UNLEASH A HORRIBLE WAY TO DIE 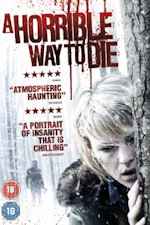 Sarah (Amy Seimetz) is trying to start a new life thanks to the help of Alcoholics Anonymous and Kevin, her new boyfriend (played by Joe Swanberg). Her old existence fell apart when she realised the man she loved was a psychopath after accidentally finding his ‘Kill Room’. But now Garrick Turrell (AJ Bowen) has escaped from prison and the corpses start piling up as he travels a direct line from Sarah’s old life to her new one.
Love, death, addiction and trauma are given a bloody, twisted blend in one of the most jagged and intense thrillers of the year.
The film is released to disc in the UK, Mar 19th.
View the trailer on You Tube
But the DVD at Amazon.co.uk
But the Blu-ray at Amazon.co.uk
Posted by Dark Angel at 18:39 No comments: 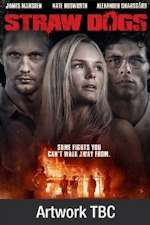 Some fights you just can't walk away from. A young couple (James Marsden - X Men, Disturbing Behaviour, and Kate Bosworth - Wonderland) moves to a quaint southern town. Soon their perfect getaway turns out to become a living hell when dark secrets and lethal passions spiral out of control.
Trapped by a pack of depraved locals led by a ruthless predator (Alexander Skarsgard - TV's True Blood, Generation Kill), they face a night of agonising suffering and endless bloodshed. Now their only hope for survival is to become more savage than their merciless torturers.
Co-starring Dominic Purcell  ("Blade 3", TV’s “Prison Break”) and two-time Oscar nominee James Woods, STRAW DOGS is a first-rate thriller fans won’t want to miss.
Killer bonus features include
-Commentary with writer/director Rod Lurie
-Remaking a Classic
-The Dynamics of Power
-Inside the Siege
-Production Design
The film is released on Blu-ray, DVD and Digital, March 12 from Sony Pictures.
Buy the UK DVD at Amazon.co.uk
Buy the UK Blu-ray at Amazon.co.uk
Posted by Dark Angel at 22:20 No comments: 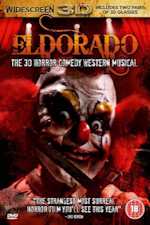 Eldorado 3D, the biggest release to come out of the UK, is set to hit UK DVD & Blu-ray this month.
After wrongly being sent to a Neo Nazi fund raiser instead of a Bar Mitzvah, Blues Brothers tribute band 'The Jews Brothers', Stan and Ollie, get offered a gig in El Dorado to make amends for the gig gone sour.
At the very same time Jessica, a beautiful but despondent wife is on the run with a million dollars from her cheating husband's night club. All roads lead to El Dorado; these lives intersect and at this point it means trouble. While these small lives revolve around each other, a bigger power is controlling the action to make their visit to this town one they will never forget. It's El Dorado's 200th anniversary, the townsfolk are hungry to celebrate, which does prove unfortunate for the tourists who come to visit and find that they are the dish of the day.
Featuring an star cast including Peter O'Toole, Daryl Hannah, Michael Madsen, Rik Mayall, Steve Guttenberg, Brigitte Nilsen, Jeff Fahey, Patrick Bergin, Bill Moseley, Sylvester McCoy, Oliver Tobias, Caroline Monroe, Robert Llewllyn, Buster Bloodvessel including the last performance of David Carradine. Eldorado 3D is more than just bad table manners and a little light music - it's a way of life.
Buy the UK DVD at Amazon.co.uk
Buy the UK Blu-ray at Amazon.co.uk
Posted by Dark Angel at 19:16 No comments:

The "Circus of Horrors" is back on tour in the UK from the 9th of January. 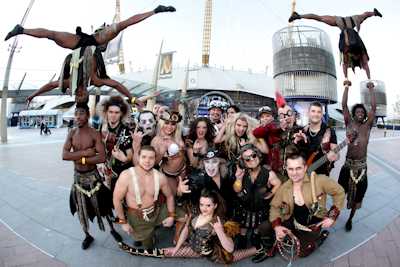 With a brilliant & awe inspiring supporting cast The Circus of Horrors features some of the greatest, most bizarre & beautiful Circus acts on earth.
Where else can you see a beautiful creature hung upside-down while a dare devil trapeze artist performs a exquisite ariel act hung solely from her partners hair!
Where else can you see a contortionist contort her body while firing a arrow from a long bow with her feet!
All this and a whole lot more. Without a doubt a musical masterpiece with the pulsating Devil driven Rock n Roll of Dr Haze & the Interceptors From Hell.
Without a doubt the most sinister and sensational Circus of Horrors show to date.
Imagine if Quentin Tarantino had directed Cirque Du Soleil then you would be only half way there.
The show is on tour from the 9th of January until the 24th of March  and visits a staggering 60 different venues all over UK.
For more info visit the CIrcus of Horrors Website

Thou Shalt Not Kill... Except 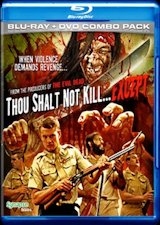 Cult classic "Thou Shalt Not Kill... Except" is coming to US Blu-ray and DVD courtesy of Synapse films.
Vietnam, 1969. War is Hell. For Marine Sergeant Jack Stryker (Brian Schulz), however, Hell is just the beginning.
Trapped outside a Viet Cong village, Stryker takes two bullets to the leg. Sent home from the war, he discovers his ex-girlfriend (Cheryl Hausen) has been kidnapped by a religious cult with a vicious Manson-like leader (played by THE EVIL DEAD and SPIDER-MAN director, Sam Raimi). Stryker teams up with his marine buddies to form an assassination squad to annihilate the gang of crazed killers.
Synapse Films proudly presents THOU SHALT NOT KILL… EXCEPT in an all-new 2K high-definition transfer from the original negative. Directed by Josh Becker, this “must see” cult classic features many of the creative personnel responsible for THE EVIL DEAD, including co-writer Bruce Campbell, writer/producer Scott Spiegel (INTRUDER), composer Joseph LoDuca, and actor Ted Raimi.
Special Features:
• All-New High-Definition 2K Digital Restoration from the Original Negative
• The Original Super 8mm Short film, STRYKER’S WAR, starring Bruce Campbell!
• Made in Michigan: The Making of THOU SHALT NOT KILL… EXCEPT – Featurette
• Two Audio Commentaries featuring Director Josh Becker, Bruce Campbell, and Star Brian Schulz
• All-New Video Interview with Actor/Writer Bruce Campbell
• Deleted Scene with Optional Director's Commentary
• Alternate Title Sequence
• Original Theatrical Trailer
• Reversible Alternate Cover Artwork
Buy online at Amazon.com
Posted by Dark Angel at 14:49 No comments: