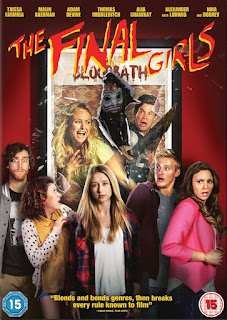 They soon realize they are trapped inside the cult classic movie and must team up with the fictional and ill-fated camp counsellors, including Max’s mum as the scream queen, to battle the film’s machete-wielding killer. With the body count rising in scene after iconic scene, who will be the final girls left standing and live to escape this film?

"The Final Girls"  is released to UK disc and digital October 12th from Sony Pictures Home Entertainment.
Watch the trailer on YouTube

Pre-order the UK DVD from Amazon.co.uk
Posted by Dark Angel at 16:59