"A Moment of Horror" - A review 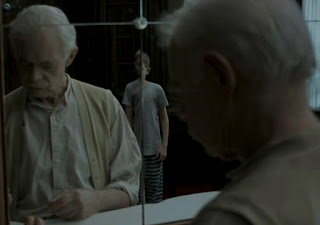 Film4 recently sponsored 6 directors to come up with a short film each, which would premiere at the Film4 Frightfest in London.

The result was “A Moment of Horror”, 6 short films that will make you think twice before turning off the lights. The shorts were well received by festival goers and are now viewable on Channel 4s On-Demand service “All 4”. And I was asked if I wouldn’t mind watching and reviewing them.

The first film “Killing Time” from director Michelle Fox ("Zomnic") is a film that I'm sure a lot of downtrodden workers can sympathise with. As a disgruntled employee (Meghan Doyle) decides to goof of the rest of her shift by hiding in the toilets. Only to find something lurking in there that’s far worse than her boss…

“Behind You” by Lee Lennox ("AmStarDam") sees a babysitter (Eline Powell) who’s rather disturbed with the choice of fairytales the young girl she’s looking after wants to read to her. Only to find that the unsavoury characters in them may not be fictional.

Andrew Brand’s ("Where There’s Smoke") “What the Dog Saw” is more of a supernatural thriller. If you’ve ever had a dog that appears to be barking at nothing, this film offers a suggestion at what might be setting it off.

“Bath Time” from Rose Glass ("Room 55") seems to take it’s cue from those oriental, supernatural horror films, like “The Ring”, “The Grudge” etc, in which a woman (Elizabeth Chan) who’s trying to enjoy a nice relaxing bath finds something nasty has manifested itself in her bathroom, but can her self-help tapes save the day?

Christian James (“Freakout”, “Stalled”) “Night Feed” provides one of the lighter hearted segments, in which a young mother gets up in the night to feed her crying child, only to discover something else in the crib and its not after milk.

The last film “The Doorkeeper” from Weronika Tofilska (winner of FrightFest’s Short Cuts to Hell competition) is arguably my favourite segment, in which an old caretaker (John Atterbury, who Harry Potter fans may recognise as Phineus Black) is locking up an old manor house for the night, only to discover doors keep unlocking themselves and lights turning themselves on. Done in the style of a traditional ghost story, we quickly discover ghostly goings on are afoot, but its not what (or indeed who) we think…

Each segment has its own unique style and I found them to be quite entertaining.

They are available to view online individually at Channel 4 on Demand (may only be viewable to UK residents)
Posted by Dark Angel at 20:56