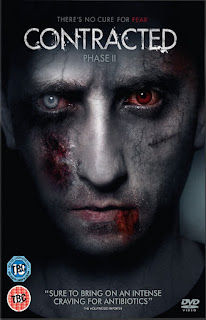 Prepare to be shocked all over again as the zombie/body-horror hybrid returns with a new cast of characters literally going to pieces from the deadly virus in "Contracted : Phase II".
Picking up immediately after the events of the original "Contracted", Phase II follows Riley (Matt Mercer), now infected and running out of time, as he attempts to find out more about the virus and its mysterious host.
As he digs deeper into its origins, Riley attracts the attention of a detective (Marianna Palka - "Neds") who doubts his innocence, and BJ (Morgan Peter Brown - "Oiuja") himself, who holds the key to the virus – and perhaps the destruction of mankind as we know it, leading to a blood-soaked finale you have to see to believe.

Having premiered at this year’s Film4 FrightFest, make sure you buckle up for more skin-crawling terror in the genre ride of the year!