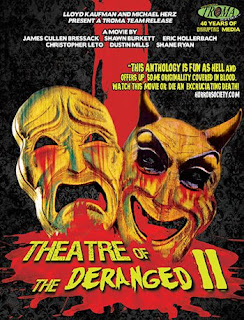 THEATRE OF THE DERANGED II  was recently acquired by TROMA for distribution. The film will be released on US BLU-RAY and VOD on October 13, 2015. As of yet, no DVD release is planned.

Pre-order the US BD from Amazon.com
Posted by Dark Angel at 16:55