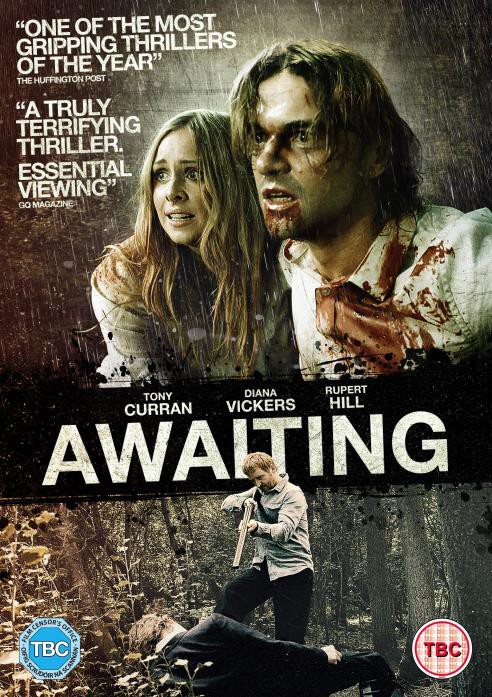 "Awaiting" is the second directorial feature from Mark Murphy ("The Crypt"), which had it’s UK premiere at this years Frightfest, and is set to come out on UK DVD and on Digital this month.

The film stars genre regular Tony Curran ("Underworld : Evolution", "TVs Defiance") as a reclusive man named Morris, who lives on a remote farm in Yorkshire with his teenage daughter Lauren (played by X-Factor wannabe Diane Vickers). Lauren seldom goes out, having been home-schooled by her father, who earns a living doing recovery work for his friend who owns the local garage.

When he arrives home with an unconscious young man, Jake (Rupert Hill – “Entity”) who he says he saved from a car crash, Lauren becomes quite smitten with him and they insist he stays and recovers at their home, rather than taking him to the Hospital.

Jake finds this all rather peculiar, even more so with the uncomfortably “close” relationship Lauren has with her father. But when he finally decides he’s had enough of their hospitality and insists on leaving, things take an even more sinister twist, as he finds himself being held captive, and it seems he’s not the first ‘accident’ victim Morris has brought home…

Clearly inspired by the legend of Ed Gein, a Wisconsin farmer who did strange things to people who crossed his path. The film mixes in elements of “Psycho” and “Texas Chainsaw Massacre” and blends them with elements from “Saw” (I’ll never be able to look at my guitar in the same way again when I’m replacing the strings).

Overall, the film is a satisfyingly creepy tale about falling afoul of local yokel types. However, there were a number of plot holes near the end which didn’t quite sit right with me. I don’t want to go into too much detail as I don’t wish to spoil the plot, but Jake had a couple of opportunities to get to safety, or pick up a weapon that was lying around, but failed to take advantage of them, which just seemed silly.
Worth watching if only for seeing singer Diane Vickers with very little on.

The review copy I viewed did not contain any supplemental features and I have no idea if any will be included on the final release.
The film is released to UK DVD and on Digital, Sept 7.
Buy the UK DVD from Amazon.co.uk