"Nightmares in a Damaged Brain" comes to UK disc 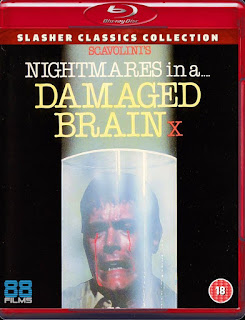 Few slasher classics have proven to be more controversial than Romano Scavolini's sicko slice 'em up epic "NIGHTMARES IN A DAMAGED BRAIN"!

Featuring enough Freudian-fermentation to appease genre academics, and packing in more plasma splashed set pieces than any of its rivals, "NIGHTMARES IN A DAMAGED BRAIN" is advised only for the strongest of stomachs! One thing is for sure though - this is the Slasher Classic you have all been craving for, remastered and restored from the original in-camera elements!

The film is released to UK BD and DVD September 21st from 88 Films.