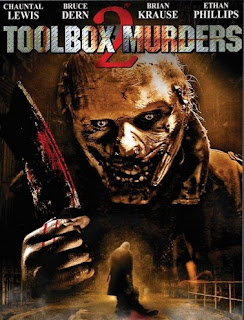 The handyman of horror is back with a new box of tricks in this terrifying sequel to Tobe Hooper's 2004 reimagining of the 1978 cult favourite.

Picking up directly after the events of Hooper's 2004 film, we follow ‘Coffin Baby’, Hollywood's most twisted killers, as he plans to put the screws to a new victim - Samantha, the sister of his prey from his previous rampage. Samantha finds herself held captive in a house of horrors and forced to undergo the most unspeakable tortures…

"Toolbox Murders 2", will be released in the UK on DVD and Download simultaneously on Oct 12, 2015, courtesy of TriCoast UK.