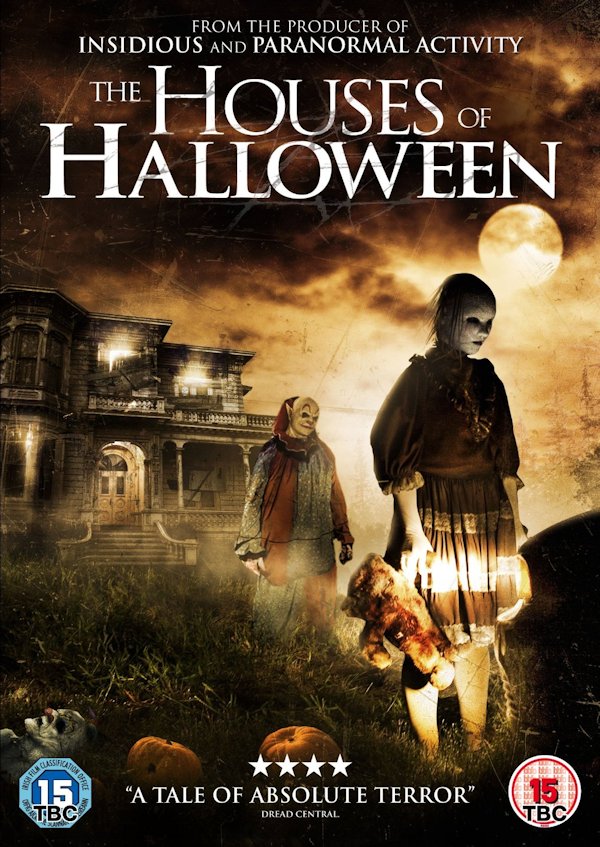 Director Bobby Roe’s “Houses of Halloween” is out on UK DVD next month courtesy of Kaleidoscope entertainment, who were kind enough to send over a review copy for me to take a look at.

Halloween is big business in America, each October around 2500 haunted attractions open up across the land, hoping to entice in scare seekers. So with this in mind, a group of friends decide to go on a road trip in their camper van, to make a film about them, visiting as many as they can to see if they can find one they consider the most extreme.

Unfortunately, they manage to upset a number of people that work at several of these attractions, who it seems don’t like being filmed, and they find themselves being stalked on the road by creepy clowns and people wearing amateurish zombie make up from the carnival. But despite this, when they get a cryptic invite to a haunted attraction called The Blue Skeleton, which boasts as being the Ultimate scare attraction, the group just can’t resist following it up, even if it may have dire consequences for them…

Told entirely through the groups documentary film cameras, this is yet another one of those “found footage” style films, which unfortunately I’m not much of a fan of. Indeed, the film could best be described as "Blair Witch Project" meets “House of 1000 Corpses”. But whilst the intro initially had me interested, I very quickly lost interest and found the film to be a bit of a borefest.

The problem was that there were these really long periods where nothing seemed to happen, just endless footage of them driving from one place to another and them wandering round these attractions. Occasionally, when something strange or mysterious happens to them, the payoff just doesn’t seem to be worth the wait and actually found myself fast forwarding through parts.

Released in the US as “The Houses that October Built”, the film is, apparently, very loosely based on a real documentary of the same name the director made back 2011 about Halloween attractions. Though I haven’t seen that to comment.

If you like “Found Footage” style films you may want to seek this one out. But otherwise, you’d be advised to give this one a miss. The film is released to UK DVD October 5th and contains a trailer as an extra.
Pre-order the UK DVD from Amazon.co.uk
Posted by Dark Angel at 17:50