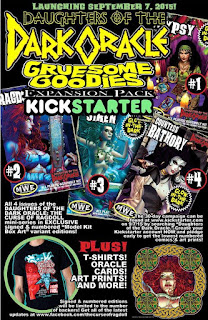 Mike Wolfer Entertainment has just launched a new Kickstarter that fans of Gothic horror will love to dig their fangs into: DAUGHTERS OF THE DARK ORACLE: GRUESOME GOODIES!

Designed as an “expansion pack,” the Kickstarter rewards are linked to Wolfer’s DAUGHTERS OF THE DARK ORACLE: THE CURSE OF RAGDOLL

mini-series, in stores now. If you're unfamiliar with his work, he’s best known for his writing and art on series like LADY DEATH, GRAVEL, NIGHT OF THE LIVING DEAD, and FRIDAY THE 13TH, as well as his self-published, erotic horror series WIDOW.
Rewards include four limited-edition “Model Kit Box Art” variant covers of all four issues of the first DAUGHTERS mini-series, as well as art prints, t-shirts, and three new Oracle Cards, which are similar to Tarot cards and are seen being used by the characters in the book itself. This first series takes the story seen in the award-winning, black-and-white THE CURSE OF RAGDOLL graphic novel and divides it into four, monthly issues. Its sequel, DOTDO: ORGY OF THE VAMPIRES, is scheduled for November 2015.
DAUGHTERS OF THE DARK ORACLE: THE CURSE OF RAGDOLL is a 2015-Kickstarted four-issue, black and white mini-series that will be appearing on store shelves worldwide in August through November of this year, self-published by Mike Wolfer Entertainment.
The series is written and drawn by Mike Wolfer, lettered by Natalie Jane, ink wash tone assistance by Dan Parsons, with all cover, art print, and Oracle Card images colored by the talented Ceci de la Cruz. The first DAUGHTERS mini-series retells the tale originally seen in THE CURSE OF RAGDOLL graphic novel, which was funded through Kickstarter in 2014.
Set in the late 18th century, DAUGHTERS OF THE DARK ORACLE: THE CURSE OF RAGDOLL tells the tale of an enigmatic creature, a living dead woman pieced together from the cadavers of others, with a supernatural thirst for vengeance against those who killed the original owners of her composite parts. One by one, "Ragdoll" hunts down murderer after murderer, and subjects them to most horrific, and fitting, punishments.
Fully funded in under 24 hours, the campaign runs from September 7th through October 7th, and can be found on the Kickstarter Page