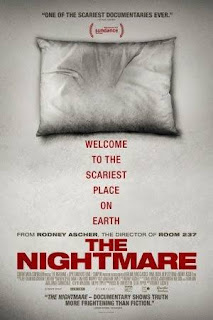 Altitude Film Distribution are soon to be releasing what is tipped to be one of the scariest documentaries of all time "The Nightmare".
Exploring the phenomenon of 'Sleep Paralysis' through the eyes of eight very different people. These people (and a shockingly large number of others) often find themselves trapped between the sleeping and waking worlds, helpless, totally unable to move but aware of their surroundings while being subject to frequently disturbing sights and sounds.

A strange element to these visions is that despite the fact that they know nothing of one another, (and had never heard of sleep paralysis before it happened to them), many see similar ghostly 'shadow men.' This is one of many reasons many people insist this is more than just a sleep disorder.

"The Nightmare" digs deep into not only the particulars of these eight people's uncanny experiences (through elaborate, sometimes surreal dramatisations), but it also explores their search to understand what they've gone through and how it's changed their lives.

This film was inspired by the director's own experiences with Sleep Paralysis and how startled he was to discover that he wasn't the only person pinned motionless to their bed while being menaced by a living, three-dimensional shadow.

As the team travelled both around the world (and into the bottomless pit of the world wide web) they were constantly amazed to discover strange similarities in people's experiences as well the amount of radically different interpretations about what was really going on.

In a way "The Nightmare" is two very different horror movies at once; there's obviously the primal terror of being helpless in the face of a mysterious intruder, but then there's a subtler, existential terror in the lines between reality and the imagination.
"The Nightmare" is opening in cinemas on 9th October
Posted by Dark Angel at 18:55