The first 2 films have been announced for the 'UK Festival of Zombie Culture' in Leicester this November. 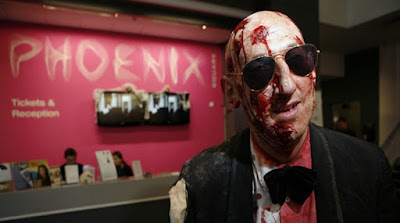 First up is "DARKEST DAY". A young man wakes up on a beach with no memory. He discovers an empty city ravaged by a deadly virus. After befriending a small group of survivors it soon becomes clear the army are hunting him down, and the group are forced on a dangerous journey to escape.
The Cast and Crew will be in attendance to introduce the film and field questions afterwards. "DARKEST DAY" is an independent action/adventure/zombie feature film shot in Brighton (UK) by BrightHelm Films and took over 7 years to complete.

The second film, stars Elijah Wood in "COOTIES". A horror comedy with unexpected laughs and unapologetic thrills. When a cafeteria food virus turns elementary school children into killer zombies, a group of misfit teachers must band together to escape the playground carnage.
The film stars Elijah Wood ("Lord of the Rings" Trilogy), Rainn Wilson ("The Office"), and Alison Pill ("The Newsroom") as teachers who fight to survive the mayhem while hilariously bickering in an uncomfortable love triangle on the worst Monday of their lives.
'The UK Festival of Zombie Culture' (AKA Day of the Undead) is being held on 14th November at the Pheonix Arts Cinema, Leicester.
For more info, and to purchase tickets visit Phoenix website
Posted by Dark Angel at 15:56