All treats and no tricks…Horror Channel celebrates Halloween with a special HAUNTED HALLOWEEN SEASON, a spectral selection of movies which will take possession of the nation’s TVs every night for two weeks in October - from Saturday 17th to Saturday 31st, 9pm.

Here is the full line-up: 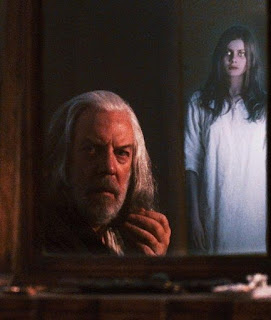 The wind whispers ominous warnings of death before a malevolent entity arrives to claim the life of a young girl as director/writer Courtney Solomon brings author Brent Monahan's chilling, fact-based story of supernatural murder to the screen in this tale of terror starring Donald Sutherland, Sissy Spacek & James D’Arcy.

From Paul Solet, director of the acclaimed hit Grace, comes a suspense thriller focusing on a 17-year-old boy, Daniel, on house arrest for stalking, Mona, a female classmate online.  He thinks he has piggybacked his neighbours' wireless signal but then things start to happen and feels a strange presence in the house.

This sequel features Rob Lowe as National Guard Captain Ted Cogan, an Iraq War veteran whose past comes back to haunt him. After returning home from the line of duty, Cogan’s notion of his life returning back to normal is scuppered when he has visions of a group of innocent bystanders he inadvertently killed in Iraq.

Investigative reporter John Baxter (Tony Roberts) buys a notorious house in the Long Island suburb of Amityville in an attempt to prove that stories about its being inhabited by demons are fraudulent. But soon his daughter, Susan (Lori Loughlin), and her friend Lisa (Meg Ryan) are experiencing inexplicable terrors, while his estranged wife, Nancy (Tess Harper), and supernatural expert Elliot West (Robert Joy) fear that the evil has begun to spread outside the house's walls.

When their youngest daughter, Em (Natasha Calis), becomes strangely obsessed with an antique wooden box, parents Clyde (Jeffrey Dean Morgan) and Stephanie (Kyra Sedgwick) see little cause for alarm. However, Em becomes increasingly unstable, leading the couple to fear the presence of a malevolent force. To their horror, Clyde and Stephanie learn that the box contains a dybbuk, a dislocated spirit that inhabits, and ultimately devours, a human host.