"The Messenger" - a film review. 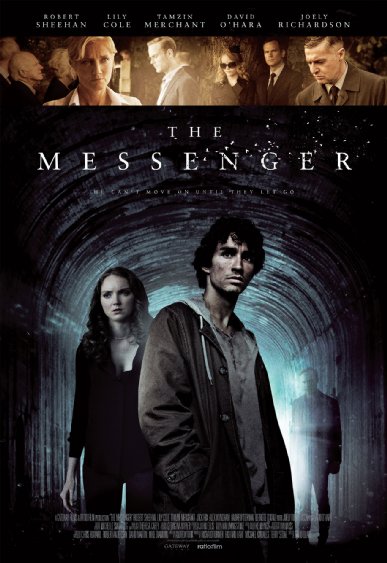 Director David Blair’s "The Messenger" is released to UK cinemas this Friday and I was fortunate to get a sneak peek at it, ahead of its release.

The film revolves around a dishevelled young man named Jack (played by “Misfits” Robert Sheehan), who has been driven to distraction, as he can see ghosts of the recently departed. Constantly hounded by these undead spirits, asking him to send messages back to their loved ones. The pressure of having to constantly deal with these people, which no one else can see, has driven him to drink and to the brink of insanity.

Having been in and out of psychiatric care most of his life, the doctors just think he's delusional and keep prescribing him anti-psychotic drugs. Which he usually ends up selling to the smack heads that live beneath his squalid flat, so that he can buy more alcohol.

After getting a good hiding from the mourners at a teenage girl’s funeral, he decides he's had enough of trying to deliver messages from the other side. So when he's confronted by the ghost of a prominent news reporter, asking him to contact his former girlfriend, he initially refuses. But this one ghost is particularly insistent, especially as his death was no accident…

An interesting film, which I would describe as a drama first and a supernatural thriller second. The films central premise, about the journalist trying to contact his former partner, is really more of a sub-plot, whilst the main focus of the film is actually on Jack and how having to deal with ghosts on a daily basis has taken its toll over the years.

Indeed, a lot of time is given to introducing Jack and the other people in his life, such as his estranged sister (Lily Cole – "Snow White and the Huntsman"), and filling in his back story as to how he got to his present state, which also leaves us with the question as to whether he really can see these ghosts or is just delusional.

Overall, I was very impressed and found it to be an intriguing and consistently engaging supernatural drama. It is what I would call a “slow burner” though, so don’t expect an action movie. But if you get chance, I would recommend going to see it.

The film is released to UK cinemas Friday 18th September.
View the trailer on YouTube
Posted by Dark Angel at 18:05