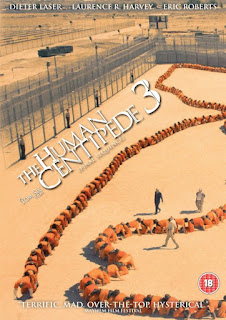 Monster Pictures to release THE HUMAN CENTIPEDE 3 (Final Sequence) in selected cinemas from 10 July, and on Blu-ray, DVD & VOD on 20 July 2015.

In the annals of horror, only one film series is almost too disgusting to describe! Now the unthinkable has become all too real! The final chapter to the most notorious movie franchise ever made has arrived – The Human Centipede 3 (Final Sequence).

Bully prison warden Bill Boss (Dieter Laser), has a lot of problems; his prison statistically has the highest amount of prison riots, medical costs and staff turnover in the country. But foremost he is unable to get the respect he thinks he deserves from his inmates and the state Governor (Eric Roberts). He constantly fails in experimenting with different ideas for the ideal punishment to get the inmates in line, which drives him, together with the sizzling heat, completely insane.

Under threat of termination by the Governor, his loyal right hand man Dwight (Laurence R Harvey) comes up with a brilliant idea - a revolutionary idea which could change the American prison system for good and save billions of dollars. An idea based on the notorious Human Centipede movies that will literally and figuratively get the inmates on their knees, creating the ultimate punishment and deterrent for anyone considering a life of crime.  Having nothing to lose, Bill and Dwight create a jaw-dropping 500-person prison centipede.

Re-uniting the stars of the first two films (Dieter Laser & Laurence R. Harvey), The Human Centipede 3 (Final Sequence) is the finale the world’s sickest horror franchise deserves. Nasty, revolting, and utterly deplorable, if you thought the first two films were gross, trust us, you ain’t seen nothing yet!
Incidentally, the organisers of the Mayhem film festival are also having a special screening with Director Tom Six and star Dieter Laser at the Broadway cinema on July 4. For more info on that visit the Broadway Cinema Website