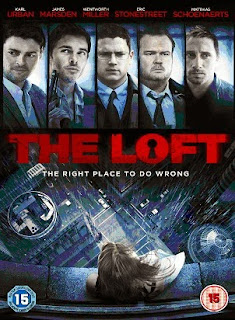 A dead body in a penthouse apartment spells trouble for Karl Urban and his womanising friends in the psychological thriller “The Loft”, which comes to UK DVD this month from Signature Entertainment.
5 wealthy businessmen club together to purchase a luxury penthouse apartment to make it easier for them to ‘entertain’ ladies behind their wives backs at weekends. But when one of them discovers the dead body of a young woman handcuffed to the bed, the group panics and rather than call the police, tries to work out which one of them might be the killer.
As the accusations fly and tempers fray, paranoia sets in and the group quickly begins to turn on one another…
Containing more twists and turns than a Hitchcock movie, the film is essentially a remake of Director Erik Van Looy’s earlier Belgian thriller of the same name. Of course, whether you’ll like this will depend on your love of crime thrillers. Personally I thought it was extremely well done, but is not the sort of film I would normally watch.
It does however boast a rather good cast, which includes Karl Urban (Star Trek), James Marsden (X-Men franchise), Wentworth Miller (Stoker, TV’s The Flash),  Eric Stonestreet (TV’s American Horror Story), and Matthias Schoenarts (The Drop, Suite Francaise) along with Rhona Mitra (Underworld 3) and Valeria Cruz (TV Dexter and Homeland)
The film is out on UK DVD June 15. There are no extra features included on the disc.