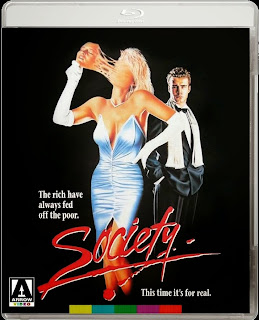 Do you ever feel that the rich and wealthy are a different species to the rest of us folk? Well that’s certainly the case in Brian Yuzna’s “Society”, which comes out on UK disc in a special edition BD/DVD combo pack this month from Arrow films.
The film stars a pre-“Baywatch” Billy Warlock as teenager Bill Whitney. Despite coming from a wealthy family and doing extremely well at school, he has been suffering from terrible nightmares that his family and the others around them are somehow dangerous and that he doesn’t fit in with them.
His psychiatrist tells him its simply teenage anxiety, but when his friend David, who used to date his sister, reveals a tape recording that sounds like his parents and sister indulging in some sort of mass orgy and murder. He realises there’s a good reason his subconscious is trying to tell him something. Particularly when anyone who suspects anything about them, quickly comes to a sticky end.
People say that the rich feed off the poor and that they act like a different species. Well it seems both these claims are quite literally true, as Bill discovers that there is indeed something very wrong with his family and their high society friends…
Directed by Brian Yuzna, who’d previously produced “Re-Animator”, this one was originally released in the UK way back in 1990 and quickly garnered a cult following. I remember Re-Animator being gory, but nothing was to prepare me for these bizarre orgy scenes, in which people can turn themselves back to front, inside out and quite literally “absorb” their victims.
Originally announced for a BD release back in 2013 by a different firm, legal wranglings saw that release scuppered. Fortunately, for those pining for this on BD, or DVD, Arrow managed to  cut through the red tape and add it to their catalogue, and have done their usual sterling work in putting together an extras laden special edition.

Extras on the discs include…

• Governor Of Society (16 mins) - Brian Yuzna discusses the making of the film.

• Masters Of The Hunt (22 mins) Interviews with Billy Warlock, Devin Devasquez, Ben Meyerson and Tim Bartell discussing their roles in the film.

• Brian Yuzna Q&A (38 mins) Q&A session, filmed following a screening at the Celluloid Screams Festival in the UK in 2014.

• Screaming Mad George music video – A somewhat bizarre addition to the disc, a video of the song “Transmutation”, from Screamin Mad George’s days as a Punk Rock musician, featuring a lot of his special effects handiwork.

Both the BD and DVD contain the exact same extras on them.

The case also contains a reversible sleeve featuring original and newly commissioned artwork and inside you get a  collector’s booklet featuring new writing on the film, illustrated with original archive stills and posters
Society is a very weird film and I remember it confusing the hell out of me when I first watched it as a teenager all those years ago, as it was like watching a Cronenberg film on Acid and I didn’t get the black humour. I still say that the film is something of an ‘acquired taste’, but whatever your views, you’ll never be able to listen to the ‘Eton Boating Song’ in quite the same way again.
This is the first time the film has been released to BD in the UK and its been quite some time since the film has been available on DVD. So if you’re looking to pick this film up, or you’re simply morbidly curious, then this Arrow disc is a must.
Buy the UK BD/DVD from Amazon.co.uk