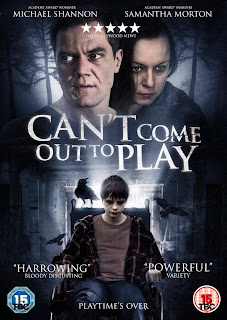 An overbearing mother proves to be the least of a young couple’s problems in John McNaughton’s “Can’t Come out to Play”, which is out now on UK DVD from Signature Entertainment.
The film primarily revolves around a young lad named Andy (Charlie Tahan – “I am Legend”), who’s largely confined to a wheel chair and is in extremely poor health. He never goes out of the house and rarely leaves his bedroom. He’s cared for primarily by his father (played by “Man of Steel’s” Michael Shannon), and his mother (Samantha Morton – “John Carter”) , when she’s not working at the local hospital.
When young Maryann (Natasha Calis – “The Possession”) moves in with her grandparents nearby, following the death of her parents. She happens to see Andy looking out of his window, and goes over to say hello and the 2 quickly become friends.
Whilst the father seems OK with her visits, the mother takes a much dimmer view and does all she can to stop her from coming round. But when Maryann defies her and starts sneaking round whilst she’s out, her behaviour becomes increasingly erratic and her attempts to re-assert control over her son becomes increasingly over bearing
But what initially seems like a family melodrama suddenly takes a very dark and sinister twist around the halfway mark, as Maryann makes a shocking discovery and we discover the real reason his parents have been buying black market medical supplies and stealing stuff from the Hospital and it isn’t because of Andy’s health…
Despite the films slow start, I think I can honestly say that this is definitely one of the darkest films I’ve had to review this year and some of the scenes that come later certainly make for very uneasy viewing.
Directed by John McNaughton, who’s probably best known for “Henry  Portrait of a Serial Killer” and “Wild Things”, he’s certainly not lost any of his dark twisted touch. The film also benefits from it’s strong supporting cast, which includes veteran actor Peter Fonda and Leslie Lyles ("Black Swan") as Maryann’s Grandparents.
The review disc I was sent did not contain any extras on.
So, if dark, twisted, psychological thrillers are your thing, this one certainly makes for compulsive viewing and don’t be deceived by it’s slow build up. This is only to make what is to come the more shocking!
View the trailer on YouTube

Buy the UK DVD from Amazon.co.uk
Posted by Dark Angel at 19:56