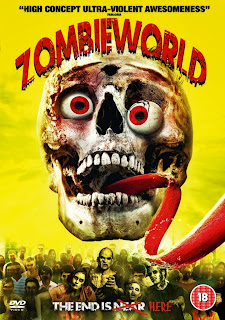 Back in 2014, US horror site “Dread Central” ran a competition inviting indie film makers to submit their short films for inclusion in a zombie anthology movie. The result was “Zombieworld”, which comes to UK DVD this month from Image.
The film features 9 short films, interspersed with zombie infomercials and interlinked by a TV newscast (featuring horror B-movie actor Bill Obert Jr as the newsreader), which presents the films as different accounts of the same zombie epidemic from different corners of the globe.
Of course, as these were all made at different times by different folk, the films, and indeed the zombies in them, have absolutely nothing in common with one another and don’t adhere to the same narrative. However, that is not to say these tales aren’t a hell of a lot of fun to watch.
The films comprise of “Dark Times”, “Fists of Jesus”, “I am Lonely”, “Dead Stop”, “Home”, “Dead Rush”, “Teleportal”, “Certified” and “Brutal Relax” and are a fairly mixed bag.
The highlights of which include the action packed “Dark Times”, which is a found footage type movie, told from a first person perspective, about a group of survivors who get attacked by zombies, subsequently turned and go onto attack another group of survivors. “Certified”, in which a mischievous young girl tricks the new postman into thinking a zombie apocalypse has just kicked off and the darkly humoured “I am Lonely” about a flatmate who would rather be undead then have to listen to his friends guitar.
The film is bookended by the awesome “Fists of Jesus”, which has been doing the rounds on the web for a while now, in which Jesus accidentally triggers off a zombie apocalypse in Jerusalem during a botched resurrection. And the action splatterfest “Brutal Relax” about a rather weird person, who seems quite content in watching his fellow sunbathers get butchered by demonic zombies that rise from the sea, until his walkman batteries run out, at which point he decides to go on the offensive in true Peter Jackson style.
There are no real extras to speak of, apart from a bonus short entitled “Marathon Apocalypse” which was some sort of advertising promo for a zombie fun run to promote the film.
Whether you will like this will depend on your love of low budget indie films. I will freely admit that several of the stories are a bit slow and dull, but in my view the disc is worth picking up solely for the “Fists of Jesus” and “Brutal Relax” segments alone.

The DVD is released in the UK on June 8.