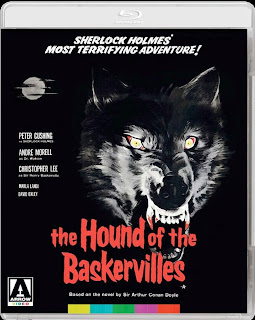 In the late 1950s, Hammer films had considerable success remaking old horror films in colour (colour still being relatively new to cinema back then). So they decided to see if they could replicate that success with a colour remake of a Sherlock Holmes tale. The result was “Hound of the Baskervilles”, which comes to UK BD this month from Arrow.
Starring Hammer regular Peter Cushing as the legendary Sleuth,  and noted actor Andre Morrel (who was a household name, due to his role as Professor Quatermass, from the BBC sci-fi show at the time), as Dr Watson. The two are pressed into service when they discover someone might be out to kill the new owner of Baskerville hall.
The previous owner, Charles Baskerville, had been found dead under mysterious circumstances and they fear the new owner, Sir Henry Baskerville (played by fellow Hammer stalwart Christopher Lee) could be next. There is a tale that the Baskerville family are cursed, after one of their ancestors, Hugo Baskerville (whos tales of cruelty and drunken debauchery were legendary) was killed by a spectral hound. But though Holmes doesn’t believe in ghosts, he does indeed believe that someone could be after Henry and sets out to discover who is trying to kill him and why.
Filmed on the sets of Hammer’s earlier “Dracula”, this was intended to be the first in a series of Sherlock Holmes films starring Cushing as the titular detective. But unfortunately, the film was not very well received upon its original release and failed to emote the success of their earlier Frankenstein and Dracula adaptations, scuppering the idea of any further films (Cushing would go on to play Holmes again in a BBC series some 10 years later though).
The film garnered critical praise in later years though and is now regarded as one of the better Sherlock Holmes adaptations. Becoming a fan favourite of both Hammer and Sherlock Holmes fans alike, making this a welcome addition to Arrows Blu-Ray catalogue. Which comes stacked which a whole host of special features, as follows…
A new audio commentary track with Hammer experts Marcus Hearn and Jonathan Rigby, who provide a lot of insightful trivia about the making of the film.
Isolated Music and Effects Soundtrack. A bit of an unusual feature in which you can watch the film with only the incidental music and sound effects audible (in case you wish to dub your own soundtrack perhaps?)
Release the Hound! (30mins) – Brand new documentary looking at the genesis and making of the Hammer classic, featuring interviews with hound mask creator Margaret Robinson, film historian Kim Newman, actor/documentarian and co-creator of BBC’s Sherlock Mark Gatiss, and others
André Morell: Best of British (20mins) – a featurette looking at the late great actor André Morell and his work with Hammer, presented by his son Jason.
The Many Faces of Sherlock Holmes (46mins) – an interesting, though somewhat dated documentary from 1985, (since this was filmed there’s no longer  a bank at 221 Baker street, but a dedicated Holmes museum), which looks at the many actors that have played Holmes in film over the years. Presented by Christopher Lee, it includes clips from the classic Basil Rathbone films and many others, including this one. Presumably made to promote/cash-in on the Steven Spielberg “Young Sherlock Holmes” film which came out in the same year, which also features heavily in this. Though strangely, the popular Jeremy Brett TV series, which was on TV at the time, barely gets a passing mention.
Actor’s Notebook: Christopher Lee (13mins) – an archive interview in which the actor looks back at the making of the film and his role as Sir Henry Baskerville
The Hounds of the Baskervilles excerpts. (14mins and 6mins) Christopher Lee reads a selection of extracts from Conan Doyle’s original novel.
Lastly we have the Original Theatrical Trailer and an Extensive Image Gallery, featuring vintage posters and artwork from the film.
The case also contains a reversible sleeve featuring original and newly commissioned artwork by Paul Shipper and inside there’s a Collector’s booklet featuring new writing on the film by former Hammer archivist Robert J.E. Simpson, illustrated with original archive stills and posters.
As always, Arrow have provided a great selection of extras for their release. The “Many Faces...” documentary is certainly a worthy edition, even though it’s a bit old now. Making this disc a must for all Hammer and Holmes fans.
The film is out now from Arrow films.