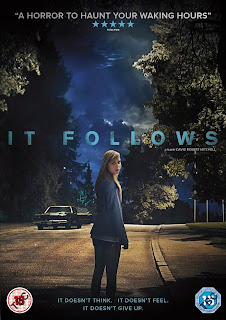 What if you could pass a demonic curse onto someone, like you could a sexually transmitted disease? That’s the premise of David Robert-Mitchell’s “It Follows”, which comes to UK disc and VOD this month from Icon home entertainment.
When Jay Height (Maika Monroe) sleeps with her new boyfriend, who subsequently vanishes under mysterious circumstances, it marks the start of a terrifying chain of events. Warning her that she is now the recipient of a deadly curse, she finds herself being stalked by strange people who only she can see.
Her friends and family are sceptical, but when they witness her being attacked by an unseen force, are forced to conclude that something very strange is indeed going on. Whilst, it seems, you can outrun these creatures, which can take on many different forms, they will always catch up eventually and so it becomes a race against time to try and find a way of ending, or at least passing on the curse to someone else.
A kind of cross between a supernatural thriller and a slasher movie, in which she’s being constantly pursued by this slow, menacing force. This is a satisfyingly creepy chiller, where you’re never too sure whether the person in the background is real or otherworldy.
The films haunting synth score, which was highly evocative of the soundtracks from the early 80s, particular John Carpenter’s “Halloween” and Vangelis’s soundtrack from “Blade Runner”, is also particularly effective. Helping add to the ever present feeling of menace and foreboding in the film.
The disc comes with the following special features.
“Disasterpiece” featurette (5mins) – which is basically an interview with composer Richard Vreeland, providing an insightful look at his scoring of the film.
Stills Gallery  (1min)- which looks at some of the concept art for the films posters.
Theatrical trailer  (1m40) – the films UK theatrical trailer is included, which I feel is a nice addition as I always like to see the original promo trailers for the film included, which are sadly missing from most releases these days.
Audio commentary track – A UK specific commentary, featuring writer and journalist Danny Leigh from the BBCs “Film” programme and Univeristy lecturer and horror film specialist Mark Yankovich of the University of East Anglia, who provides a critical running commentary on the film. Selectable from the Set-up sub-menu (not the special features menu) or using your remote.
The disc I was sent to review was the DVD version, but I’m told the same features appear on the BD release (obviously they won’t be on the VOD release).
This film was apparently very well received at the Cannes film festival and its easy to see why. This is in my view one of the MUST SEE horrors of 2015 and would definitely recommend everyone checks this out, even if only for its haunting electronic soundtrack.

The film is released to UK disc and VOD June 29th.
Pre-order the UK DVD from Amazon.co.uk