It has been widely reported on the internet that actor Richard Johnson, who is probably best known to horror fans for his role in "Zombie Flesh-Eaters", has died aged 88. 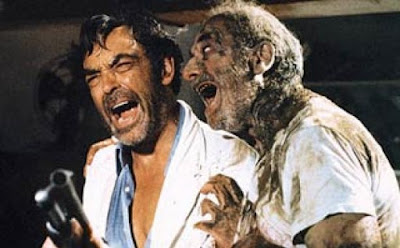 Johnson was one of the founding members of the Royal Shakespeare Company and regularly appeared on both Stage TV and Cinema during his career, which spanned some 65 years.
His early screen appearances in the 50s were mostly in TV dramas, such as Armchair theatre and the ITV Playhouse and regularly appeared in screen adaptations of Shakespeare plays.
His list of notable screen roles started in the 60s, when he appeared in the original version of "The Haunting" and also starred alongside Charlton Heston, Laurence Olivier and Ralph Richardon in the war film "Khartoum".
But it was his roles in a number of low budget Italian horror films during the late 1970s that most horror fans knew and loved him for, which included "Island of the Fishmen" (AKA Screamers), a low budget knock-off of 'Island of Dr Moreu' which mixed in elements of 'Warlords of Atlantis' and "The Great Alligator" (both by director Sergio Martino) about a South American tourist resort being terrorised by a giant reptile.
Though his most (in)famous role was that of Dr Menard, in Lucio Fulci's epic "Zombie Flesh-Eaters", which was listed as a video nasty and banned for many years in the UK, and also starred fellow British actor Ian McCulloch and Tisa Farrow (Mia's sister), in which he played a medical missionary on a remote tropical island trying to contain a disease that's turning the natives into zombies.
He continued to work regularly on TV throughout the 80s and 90s, guest starring in "Magnum PI" alongside Tom Seleck, as Higgin's friend Major Faulkes and often cropped up in British shows, including "Tales of the Unexpected", "Dempsey and Makepeace" and starred in pretty much everything from "The Kenny Everett Show",  "Kavanagh QC" and the "Ruth Rendell Mysteries" to "Tales from the Crypt".
Other notable films included 2001s "Tomb Raider" and 2008s "Boy with the Striped Pyjamas". His last film was the 2014 drama "Radiator" by director Tom Browne.
According to the BBC News, Johnson died after a short illness at the Royal Marsden Hospital in Chelsea, London. He is survived by his wife Lynne, who he married in 2004, and his four children.
RIP Richard, you will be sorely missed!