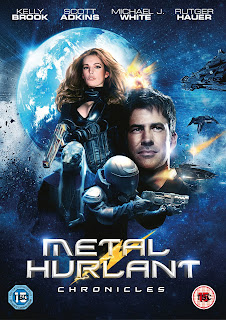 Rutger Hauer (Blade Runner), Scott Adkins (Bourne Ultimatum, Expendables 2), Michael Jai White (Arrow) and Kelly Brook (Piranha 3D) head up the cast in the exciting new sci-fi series Metal Hurlant Chronicles - on DVD, Blu-ray and download 20th July 2015.
Based on the popular comic book franchise, Metal Hurlant Chronicles links adventures that take place on separate worlds, connected by the last remains of the asteroid Metal Hurlant, which journeys through the universe. As futuristic robots, fire-breathing dragons and brutal warriors wreak havoc across the solar system, a young woman wakes to learn that the apocalypse is imminent.
Metal Hurlant Chronicles has huge diversity in its storytelling, making it unlike any other science-fiction show around. It’s an incredibly smart concept that delivers something for all fans of sci-fi and fantasy - creating a turbulent and exciting voyage where there’s danger and adventure at every turn.
Pre-order the UK BD from Amazon.co.uk