"Woman in Black : Angel of Death" this July 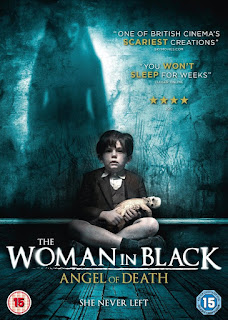 Don’t miss this year’s most terrifying horror when "WOMAN IN BLACK: ANGEL OF DEATH" arrives on UK VOD and on disc this July.

This haunting ghost story features standout performances from Phoebe Fox (One Day, A Poet In New York) as teacher Eve Parkins; Helen McCrory (Skyfall, Hugo) as headmistress Jean Hogg; Jeremy Irvine (War Horse, The Railway Man) as RAF pilot Harry Burnstow; and Oaklee Pendergast (The Impossible, Wer) as young school boy evacuee, Edward.
England, 1941. With London in the midst of the blitz, a group of children, led by their young teacher Eve (Fox) and hardened headmistress Jean (McCrory), are evacuated to the abandoned Eel Marsh House. With the aid of RAF pilot Harry (Irvine) they seek safety from the bombs in the remote coastal location, however the group instead find themselves facing an evil far more frightening when their arrival awakens the Woman in Black.

She never forgives. She never forgets. She never left. Prepare to sleep with one eye open when THE WOMAN IN BLACK: ANGEL OF DEATH is available to download on 6th July 2015 and comes to Blu-ray and DVD from 13th July 2015, courtesy of Entertainment One.
SPECIAL FEATURES
-Deleted Scene
-Chilling Locations
-Pulling Back The Veil
-Designing Fear
-From Page To Screen
-Hammer’s Legacy
-Jeremy Irvine – Great Expectations
Pre-order the UK BD from Amazon.co.uk
Pre-order the UK DVD from Amazon.co.uk
Posted by Dark Angel at 16:59