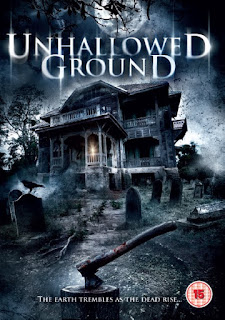 Spooky British horror, "Unhallowed Ground" puts it's own unique twist on a classic premise: a young, talented cast play a gang of teenagers who take refuge in an old school building where they find themselves fighting for their lives against burglars, spirits, and an ancient evil force.
As the lone moon rises over wild and uninhabited moors, a group of friends find themselves lost and desperate for shelter when they arrive at the door of an abandoned building, long rumoured to hide a secret vault full of treasured artifacts.

Hastening through the creaking doors, the friends begin their wait for the darkest hours of the night to pass, but quickly realise they are not alone.

When a gang of burglars suddenly arrive in search of the vault, unexplained noises, apparitions and disturbing whispers echo through the empty corridors. The house is stirring and as the ghostly noises take a deadly, malevolent turn, the teenagers realise that they must escape both the spirits and the burglars or become victims before the night is over…
Taking its cues from a classic horror staple - doomed teenagers wandering into a mysterious old building - Unhallowed Ground delivers something genuinely eerie and original.
Having already picked up some nominations and awards at the British Independent Film Festival and the London International Film Festival, Unhallowed Ground is already garnering a reputation as a true gem of the indie scene - and proof that when it comes to creaky old houses and ancient evil, nobody can match the spooky legacy of British horror!
Thomas Law ("The World's End", TVs "East Enders"), Will Thorp (TVs "Coronation Street") and Morgane Polanski (The Pianist, TVs "Vikings") star.
The film is out on VOD June 29 and DVD July 13th
Buy the UK DVD from Amazon.co.uk