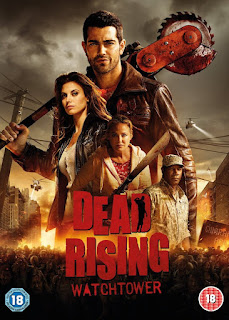 From the producers of Mortal Kombat: Legacy and the Transformers film franchise comes "DEAD RISING: WATCHTOWER" - on DVD, Blu-ray and limited edition BD steelbook (exclusive to Zaavi) this July.
Based on the globally successful video game franchise from CAPCOM, which has sold in excess of 8.2 million copies worldwide, this live-action adaptation stars a first-class cast including Jesse Metcalfe (TVs Desperate Housewives), Oscar-nominated Virginia Madsen (Sideways, Candyman) and fan favourites Meghan Ory and Keegan Connor Tracy from ABC’s Once Upon a Time.
Full of inventive, full of pumped up energy and unforgettably awesome zombie crushing moments, this is a must-see for gamers and non-gamers alike!
The film is released to UK disc 27th July from Animatsu.
Buy the UK DVD from Amazon.co.uk
Buy the UK BD from Amazon.co.uk