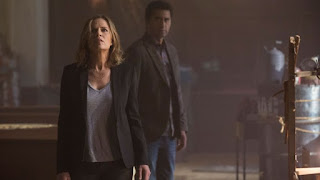 What we have here is a potentially 'Good News - Bad News' situation regarding the UK screening of upcoming Walking Dead spin off "Fear the Walking Dead".
The good news is that it is going to be shown here in September, but NOT on the Fox UK TV channel like "The Walking Dead" currently is.
Instead it's going to be broadcast on the new AMC UK TV channel, which launches in September, which is where the potential bad news lies...
AMC's UK channel is, at present, going to be exclusively available through British Telecom's own Pay TV service BT TV. So if you're one of the many millions that subscribes to stations like Fox UK through the Sky satellite platform, this channel will not be available to you.
So it seems the only way to see both series in the UK as and when they're first released is to switch from SKY to one of BT TV's premium packages (which also carries the Fox channel). Or wait until the series is repeated on one of the free to air channels, like 5* which currently airs The Walking Dead a year after its been shown on Fox UK.
The launch of the new AMC channel in the UK has also raised questions as to which channel will be screening future series of parent show "The Walking Dead". Series 6 is due to air in October on Fox, but with AMC arriving on our shores, SKY subscribers may be in for a shock by the time series 7 comes around.
Only time will tell, and it is possible that AMC may join the Sky platform at some point in the future. But in the meantime, I would suggest seeking out a friend who subscribes to BT TV to record it for you!!!