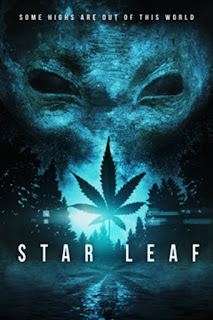 "Star Leaf" is a sci-fi thriller about an extra-terrestrial form of marijuana discovered in the Olympic forests of Washington State. The main character, played by Z-Nation’s Julian Gavilanes, is a veteran of the Afghanistan war, and the film has PTSD and its treatment with cannabis as an underlying theme.
From '90s science-fiction fave Robert Leeshock, star of "EARTH : FINAL CONFLICT", and starring "Z NATION's" Russell Hodgkinson comes a Richard Cranor film, "STAR LEAF".
A group of friends set off to find a secret forest of marijuana hidden deep in the Olympic Mountains. Legend has it the plants are of extra-terrestrial origin, and two ex-Marines among the group hope it will cure their PTSD born from hard combat in Afghanistan.
Shot entirely on Washington’s Olympic Peninsula, the movie also features actual “Star Leaf” marijuana plants developed by Ohana Farms to help in PTSD treatment. The movie and strain have received the support of Analytical 360, Washington’s first I-502-certified testing lab.
Writer/Director Richard Cranor was inspired to make the film by his Iraq-veteran brother’s experiences with PTSD, as well as Cranor’s own recent bout with cancer. “What I learned going through cancer and my brother's PTSD experiences is that we definitely need cannabis as an option for treatments. I strongly oppose anyone or any institution that limits people’s right to treat themselves, especially when you're dealing with issues like cancer and PTSD. That’s really key in my personal belief system,” says Cranor. “For PTSD, cannabis allows people to bypass the conscious mind and get to the root of a lot of those painful memories faster than traditional therapy…. For me it’s not necessarily about the plant specifically, so much as the right for humans to be in charge of their own sovereignty; and plants like marijuana shouldn't be vilified for doing nothing more than being a natural, healthy addition to our lives.”
Despite its sober message, “Star Leaf is first and foremost a wild, entertaining ride,” says executive producer Robert Leeshock (Earth: Final Conflict). Leeshock and Cranor are working with co-producer/distributor Leomark Studios on a novel distribution strategy: exclusive pre-release in MMJ and RMJ dispensaries and through the film’s own website for 3 months, followed by a wider release in fall 2015 on VOD/DVD.


The highly-anticipated science-fiction/horror film is now available from Leomark Studios, available to order from http://www.starleafmovie.com/