"The Story of a Disappearance and an Appearance" - A Review 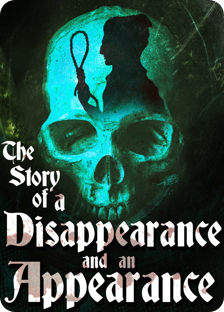 To my shame, I must confess that until last year I had never heard of the British Gothic Horror Author M R James, until I saw an adaptation of his story "Count Magnus" by British film makers Mansfield Dark Productions at the 2015 Mayhem Film Festival.

What stood out about this film, was it was told using Shadow Puppets, rather than actors, or even CGI characters, which I felt added to its eerie gloom. Well, Mansfield Dark have just produced a follow up film, based on another M R James tale “The Story of a Disappearance and an Appearance”.

Once again employing shadow puppetry to tell the tale, this particular story concerns a lone individual writing to his relatives about the fate that befell an uncle of theirs and how a bizarre nightmare about a psychotic punch and judy show may shed some light on a very strange occurrence in the town regarding the death of a couple of carnival puppeteers and the discovery of their late uncle’s body.

Definitely one for fans of M R James work, this really is quite a chilling tale and I would defy anyone to say they weren’t unsettled by the nightmarish Mr Punch show. As with their adaptation of "Count Magnus", the shadow puppetry really adds to the dark, sinister nature of the plot. If you’ve never heard of M R James, both "The Story of a Disappearance and an Appearance" and "Count Magnus" are a good way of getting into his works, which are right up there with the likes of Edgar Allen Poe.

The film is available to stream online, along with Count Magnus at Amazon.co.uk