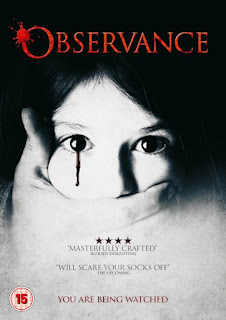 A private Investigator, Parker (Lindsay Farris – Primal), takes what appears to be, a fairly easy surveillance job. All he has to do is sit in a disused flat and monitor what the woman in the flat across the street is getting up to.

At first, things seem fairly mundane, with nothing to do but sit and watch this girl mooch about her flat and report her daily goings on to his client. But then strange things start happening to him.

He becomes extremely ill, develops bad skin and begins suffering strange nightmarish hallucinations. Which get propgressively worse the longer he stays in the flat, keeping this woman under observation and, well, that’s about it really.

I thought I was going to be watching a psychological horror along the lines of Rear Window, what I got instead was something that resembled a particularly boring episode of Big Brother, as pretty much the entire film is spent watching this person in a flat, watch some other person in another flat, who is doing nothing, with a load of weird surreal images thrown in, as the main protagonists health deteriorates.

The reason why he falls ill, or what’s with the images he’s seeing, or why he’s being paid to observe this girl is never explained and to be quite honest, I quickly became bored and started fast-forwarding. The ending was another point (which I won’t spoil), I didn’t get why he did what he did at the end, even if he was going apparently mad.

To summarise, I didn’t enjoy this, not sure what the point of the story was and overall was just plain boring.

The disc comes with a short making-of feature, which contains interviews with the cast and crew and a trailer.

The film is released to UK DVD from Oct 10 from Soda pictures for those who may still be morbidly curious about this despite my review.