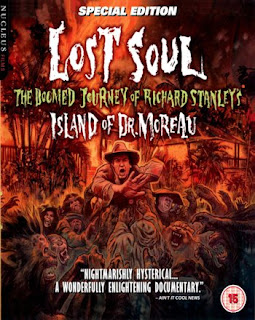 Nucleus films journey back to the troublesome island of Dr Moreau this month to bring us the highly anticipated documentary LOST SOUL : THE DOOMED JOURNEY OF RICHARD STANLEY'S "ISLAND OF DR MOREAU", on UK BD.

I’m sure cult movie fans will probably be aware of the many troubles this 1995 production had. How original director Richard Stanley was unceremoniously sacked shortly after filming had started. The squabbles on the set between lead actors Marlon Brando and Val Kilmer. The friction between the cast and crew with new director John Frankenheimer and the myriad of other problems that lead to this being a critically panned, box-office failure, which effectively ended Richard Stanley’s short lived film career.

Well now, for the first time, thanks to director David Gregory (co-founder of Severin films and director of numerous horror documentaries), we get to go behind the scenes and find out what really went wrong. In an in depth interview with the man himself, Richard Stanley, who now lives in rural France, having become something of a recluse.

Starting off with a look at Richard Stanley’s early films, Hardware and Dust Devil the documentary goes into how he managed to get the job of writing and directing, what was supposed to be his dream movie and detailing where it all went horribly wrong and even how his attempts at invoking witchcraft to try and save it, ultimately failed…(yes you read that right).

It also looks at the subsequent aftermath his replacement John Frankenheimer had to deal with (in particular, the legendary spats with Brando and Kilmer). With executive producer Robert Shay, then head of New Line Pictures, along with many cast and crew members, such as Fairuza Balk (The Craft), Marco Hofschneider and Rob Morrow all contributing. It also answers the long standing rumour as to whether or not Richard Stanley really did sneak back onto set disguised as one of the creatures.

Featuring tons of behind the scenes photos and clips and scenes from the movie itself, “Lost Soul…” is an extremely fascinating insight into the film and indeed, Stanley himself, and is certainly one that cult film enthusiasts will enjoy.

The review copy I was sent only contained the documentary. However, the full retail version also comes with the following special features…

The documentary is available to order now from Amazon.co.uk