The cult cinema experts at Arrow Video are set to guarantee film fans a happy new year come January with some spectacular DVD, Blu-ray and Dual Format releases lined up. 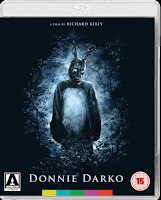 Donnie is a troubled high school student: in therapy, prone to sleepwalking and in possession of an imaginary friend, a six-foot rabbit named Frank, who tells him the world is going to end in 28 days 06 hours 42 minutes and 12 seconds. During that time he will navigate teenage life, narrowly avoid death in the form of a falling jet engine, follow Frank’s maladjusted instructions and try to maintain the space-time continuum.

Described by its director as “The Catcher in the Rye as told by Philip K. Dick”, Donnie Darko combines an eye-catching, eclectic cast – pre-stardom Jake and Maggie Gyllenhaal, heartthrob Patrick Swayze, former child star Drew Barrymore, Oscar nominees Mary McDonnell and Katherine Ross, and television favourite Noah Wyle – and an evocative soundtrack of 80s classics by Echo and the Bunnymen, Tears for Fears and Duran Duran. This brand-new 4K restoration, carried out exclusively for this release by Arrow Films, allows a modern classic to finally receive the home video treatment it deserves. 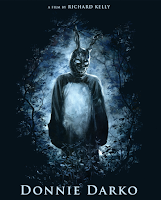 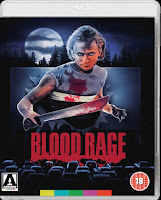 Twins Todd and Terry seem like sweet boys – that is, until one of them takes an axe to the face of a fellow patron at the local drive-in. Todd is blamed for the bloody crime and institutionalised, whilst twin brother Terry goes free. Ten years later and, as the family gathers around the table for a Thanksgiving meal, the news comes in that Todd has escaped. But has the real killer in fact been in their midst all along?

Shot in 1983 but not released until 1987, Blood Rage is a gloriously gruesome slice of ’80s slasher heaven – now restored from the original negative for its world Blu-ray debut. 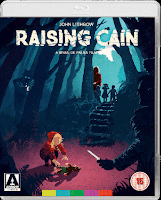 John Lithgow plays three roles: child psychologist Carter, his evil twin brother Cain, and their Norwegian father, Dr Nix, who likes to experimental on the young. Carter’s wife is concerned that her husband isn’t quite paying their daughter the right kind of attention; she’s also having an affair which, upon discovery, threatens to send him into a psychotic rage…