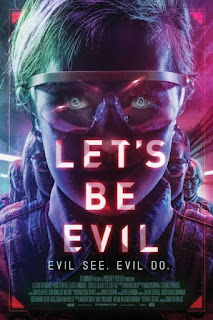 LET'S BE EVIL is an unnerving, exciting exploration of tech run amok sees an experiment in augmented reality spiralling badly out of control.

Featuring British favourite Kara Tointon (The Sweeney) as one of the chaperones, and child actress Isabelle Allen (world famous as the face on the iconic film posters for the 2012 film adaptation of Les Miserables), LET’S BE EVIL is a gripping, first class sci-fi chiller, that mixes the paranoia of John Wyndham’s Village of the Damned with the thrills and chills of gifted child run amok movie Hanna, whilst pushing the boundaries of POV horror.

With a pulsing, It Follows-style synth score (by Mr Robot composer Julian Scherle), slick futuristic production design, and ably supported by a young cast playing the sinister, hyper-intelligent candidates of the Posterity Project, director Martin Owen (L.A. Slasher) piles on the shocks, making this not just an electrifying chiller, but a prescient warning about the terrors of technology.

LET'S BE EVIL will be screened in selected UK cinemas and available from VOD outlets from October 28.