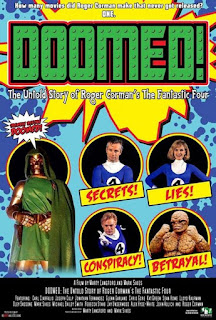 Back in 1993, infamous B-movie producer Roger Corman was approached by German producers Constantin Films to quickly put together a Fantastic Four film, based on the Marvel comics characters, which had to start shooting by the end of the year, otherwise they would lose the film rights.

Quickly rushed into production, the film was shot, edited, scored and visual effects completed on a budget of less than $1million dollars. But despite its low budget, behind the scenes, the cast and crew were so confident this was going to be so much greater, they went to extraordinary lengths to ensure the film could look as good as it possibly could, and the project took on a whole new life of its own. With the crew doing clandestine post production work whilst working for other studios, stealing additional film stock when the budget wouldn’t stretch to doing additional shoots, and even using their own money to plug gaps in finances.

But then, another rights issue cropped up, and the film was shelved indefinitely, never to be (officially) seen, much to the dismay of the cast and crew who had invested so much of their time, effort and even personal finances in it. With no prospect of a release, the film became a thing of Folklore, until bootlegs started circulating in the late 90s much to the surprise of everyone.

Now, thanks to film maker Marty Langford, we get to see an exclusive behind the scenes look at the films production and attempt to uncover what went wrong and why it was never released.

Featuring on camera interviews with the cast and crew, including Alex Hyde-White (Reed Richards), Joseph Culp (Dr Doom), Rebecca Staab (Sue Storm) Jay Underwood (Johnny Storm), Michael Bailey Smith (Ben Grimm) as well as Roger Corman himself and many others and never before seen behind the scenes footage and clips from the film, this is an extremely insightful and informative documentary, which covers pretty much everything from its inception, to casting and filming. To post production and even how the cast and crew took to the roads themselves to promote the film at comic-cons around the US, before being given the devastating news that it wasn’t going to be released.

Even for a person like me, who isn’t into comic-book movies, I found this to be a very interesting documentary. And it really was quite an eye opener as to just how invested the cast and crew were in this project.

So if you’re a Roger Corman fan, or you like your Marvel films, you’ll definitely want to check this one out.

The film will be available from US VOD outlets from 11 October and on US DVD from 20 Dec.

"Doomed..." should be viewable from the following link after Oct 11 Amazon.com