Sunday, October 16th, was the fourth and final day of Mayhem 2016, which got off to a great start at 12pm with a film that had the audience in hysterics…

Yes, Dolph Lundgren is back (again) and more than happy to send himself up in the action packed, horror/black-comedy "Don’t Kill It".

When a demonic curse is unleashed upon a small town in Mississippi, turning its residents into blood thirsty maniacs, the first thing the other townsfolk do is reach for their guns. Unfortunately, killing a possessed person simply transfers the curse to them, who then go on to wreak havoc themselves, and so on, and so forth.

With the Sheriff’s office and FBI unsure of how best to stop the mayhem, a mysterious stranger (Dolph Lundgren) enters the fray, claiming he knows how to capture this demon and put an end to the carnage, resulting in a series of slapstick and extremely bloody confrontations.

This one was terrific fun, I loved it, the audience loved it and was arguably the film of the day.

Next up was the Japanese horror/thriller “Creepy” from Kiyoshi Kurosawa (Dir – Pulse). In which a former police detective, turned university lecturer, becomes intrigued by an old missing persons case one of his students mentions, and finds himself being asked by one of his old detective friends to work on it.

But, not only does he make some shocking discoveries the original investigators missed. Having recently moved house, he also finds there is something seriously strange about his new next door neighbours…

Kind of like a Japanese “Silence of the Lambs”, it wasn’t a bad film, but it was a very slow one and in my opinion, overly long, clocking in at 130mins. If they could have shaved about half an hour off the run time to quicken the pacing, it would have made a much better film.

Third film of the day, Billy O’Brien’s “I Am Not a Serial Killer” was another one of my favourite film’s of the festival.

A young lad, being treated for an empathy deficit disorder, becomes intrigued by the workings of a serial killer who’s preying on the folk in his small mid-western town, after the bodies start passing through his family’s crematorium.

But when he witnesses one of the killings first hand, he realises this is no ordinary serial killer and no one is going to believe who, or what it was he saw.

A tense horror/thriller, which is made all the better by the inclusion of Christopher Lloyd, who’s cast against type here as the creepy old next door neighbour.

I would heartily recommend this to horror fans, also if you’re only used to seeing Christopher Lloyd in comedies, where he’s usually sending himself up, you really need to see what he’s like in this as it’s a world apart from his usual roles.

Director Billy O’Brien and writer Christopher Hyde were in attendance, discussing the film and fielding questions from the audience. Footage of which will hopefully be on my YouTube channel shortly 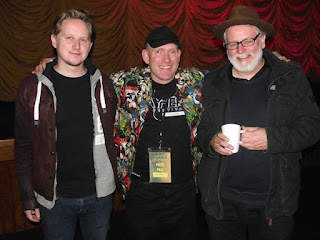 Following the annual “Flinterrogation” Mayhem Quiz by David Flint in the Broadway bar, it was back into the cinema for the final film of the festival, “The Void” by Jeremy Gillespie and Steven Kostanski.

A Sheriff’s deputy brings an injured teenager into a remote hospital, which is in the process of relocating, owing to a recent fire. Whilst the skeleton staff are trying to tend to him and the other patients, they suddenly find the hospital surrounded by strange hooded people brandishing knives.

Joined by a couple of redneck vigilantes, who have a score to settle with the teenager the deputy brought in, they find its not the people outside they need to worry about, as some of the staff begin a hideous transformation and a deadly secret in the hospital basement is about to be uncovered.

An interesting mash up of H.P. Lovecraft and John Carpenter with Rosemary’s Baby and Lucio Fulci’s The Beyond, this was another Festival highlight for me, that was well received by the audience.

Directors Jeremy Gillespie and Steven Kostanski were in attendance, along with Producer Casey Walker to chat about the film and field audience questions. Footage of which should appear on my YouTube channel shortly. 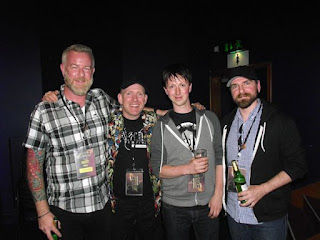 And that concluded Mayhem 2016. If you haven't already done so, read my reviews from Day1, Day2, Day3 and the Scary Shorts section.

A huge thanks to organisers Chris Cooke and Steve Sheil for putting on another great festival and the staff at the Broadway Cinema in Nottingham (in particular Melissa Gueneau for arranging my Pass) for all their hard work in hosting it.

The Mayhem Festival runs each year, mid October at the Broadway Cinema, Nottingham. They also hold other events and screenings throughout the year.