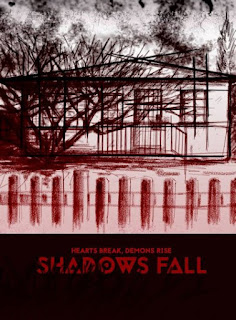 Producer/Director Aditya Vishwanath got in touch to tell us about his new film "Shadows Fall", which has wrapped production and awaiting distribution, and asked me to take a look at it.

The plot revolves around the recently widowed Senka (Dylann Quigg), who's distraught with grief following the death of her partner Jonas (Jener DaSliva). So when she discovers a way of bringing him back in the pages of some sort of demonic manuscript, she goes ahead. Even though there may be terrible ramifications for her is she does (I’m sure we all know that making deals with the devil invariably go awry).

So although she gets her loved one back, the rub is that she cannot leave her house otherwise something very bad will happen to her. Still, working from home doesn’t seem such a bad prospect. But then it seems that Jonas may not quite be the perfect partner after all, and being constantly hounded by the new nosy neighbours and constantly tormented by some smarmy demon named Amis (Christian Wennberg - who looks more like a used car salesman than a demon) she may soon regret the bargain she struck…

The film is the debut effort of director Aditya Vishwanath and was completed in just 15 days. However, whilst the movie is a competent enough piece of film making, it suffers from the usual low budget trappings (ie ropey acting, stuck in one location). Plus, to be quite honest, the plot was rather disjointed, constantly flashing backwards and forwards between scenes of what happens to the relationship after he returns and the events that lead to his death and resurrection.

Don’t get me wrong, fair play to anybody who can get a film shot, edited and scored and (hopefully) released, but personally, I just found the story to be a bit of a bore.

Anyway, the film is complete and currently awaiting distribution. For more information, visit the official Website and Facebook pages.