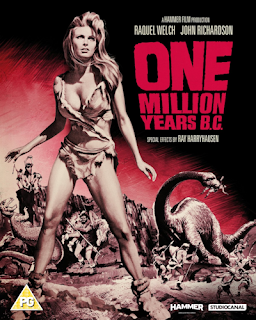 Not exactly a horror but one for cult movie lovers. If you're a fan of ONE MILLION YEARS B.C., Emfoundation and Studiocanal are delighted to announce that the 50th Anniversary Restoration of the film will be screening in the Family Film Festival section of the Cambridge Film Festival next Monday, October 24th at 12.30pm.

ONE MILLION YEARS B.C. is the spectacular prehistoric adventure that gave the world the most iconic bikini shot of all time, and made a star of fur-clad Raquel Welch. An epic tale of man’s battle for survival at the dawn of civilisation, rival tribes the Rock People and the Shell People battle not only the gigantic prehistoric monsters and each other, but the earth itself, still heaving, bubbling and boiling in its volcanic state.

Billed as the 100th production from the legendary Hammer production house, the highlight of the film was without doubt the stop-motion dinosaur animation by legendary special effects animator Ray Harryhausen.  The result was Hammer’s biggest commercial success, and the big screen's most famous dinosaur epic right up until the release of Jurassic Park 26 years later.

The film will be released on Doubleplay DVD & Blu-ray on October 24th by Studiocanal.

For more info about this and other films at the festival visit http://www.cambridgefilmfestival.org.uk


Pre-order the UK BD/DVD combo pack from Amazon.co.uk
Posted by Dark Angel at 14:31