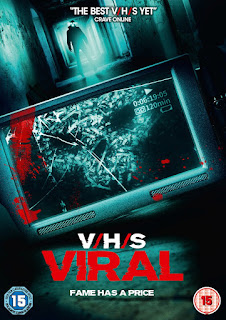 “Videodrome” meets “Tales from the Crypt” in “V/H/S : VIRAL”, the third instalment in the “V/H/S” series of horror anthologies, which is released to UK DVD and VOD this month from Koch Media.

As with the previous films, it starts with a story which provides a link between several other “found footage” tales. Entitled “VICIOUS CIRCLES” by Marcel Sarmiento (DeadGirl), this opening story revolves around a police chase, who are attempting to stop a maniac in an ice cream van which is circling an LA Suburb.

A young lad named Kev and some friends, grab their bikes and attempt to capture as much of the chase as possible on their camcorders and mobile phones, hoping to upload them to the internet and become viral sensations.

But as the van drives around the neighbourhood, people start picking up strange films on their mobile devices.

The first of these “DANTE THE GREAT” by Gregg Bishop (Dance of the Dead), focuses on a former deadbeat who goes from trailer trash to one of the worlds greatest performing magicians after discovering a cloak that gives him special powers. But, it seems there’s a price to pay for his abilities and when people start getting suspicious about the disappearance of a number of his assistants, all hell literally breaks loose.
In “PARALLEL MONSTERS” (Dir Nacho Vigalondo – Open Windows) a scientist tinkering on a device in his basement manages to create a portal to a parallel world. But it seems his counterpart on the other side is harbouring a very dark secret, with a hilarious satanic twist.

For BONESTORM, a co-directorial effort from Aaron Moorhead and Justin Benson (Resolution)  a group of skateboarders filming their antics on their helmet cams find their Jackass style stunt video ends up turning into a scene from “The Nights of Terror” (Burial Ground) after heading over to Mexico for a bit of extreme skating, only to fall afoul of a group of Satanists who quite literally unleash hell on them.

Returning to the opening film between segments, we see that these films have an adverse effect on the characters watching them, causing them to act erratically and get headaches and nosebleeds. And there’s some terrific gore as the manic van driver goes around mowing people down.

Different in style to its predecessors, being predominantly made up this time of Internet/Digicam footage, as opposed to creaky old VHS footage, this third film in the series is considerably more polished and obviously had a much larger budget this time. Indeed, “Dante the Great” is actually told “documentary” style and the found footage aspect is largely ditched in that segment, though a lot of the footage is presented as it might have been covertly filmed, to maintain some semblance of continuity with the earlier movies.

But even so, I really enjoyed this one, which quite surprised me as I wasn’t a fan of the original V/H/S. Boasting some fantastic gore and hilarious fight scenes I would heartily recommend it to fans of anthology films, if you haven’t seen the first 2 films in the series.

The screener copy I was sent to review did not contain any extras on. No news if any additional material will be included on the retail release.