Strange Kids Club, an Austin-based entertainment blog known for its disgustingly fun parody products and pop culture-inspired collectibles, is pleased to announce the launch of Cuddle Creeps, a new line of comically evil printed pillows that will be available exclusively online at HorrorDecor.net starting today. 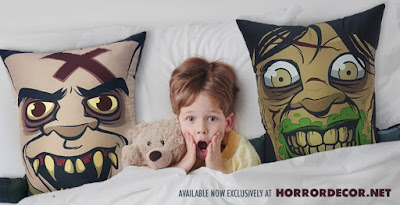 Kicking off this first wave of Cuddle Creeps are 'Regan' and 'Ed', two soft and cuddly stuffed terrors ready to feed on your nightmares. "We're looking to pay tribute primarily to lesser known horror icons within the genre," explains Rondal. "If fans dig these as much as we do there are plans for even more parodies based on some familiar faces."
Each character has a distinct personality and features a hilarious biography that's a tongue-in-cheek twist on their horrific origin:

REGAN: Whether psychic or just psycho remains to be seen, but one thing is certain: Her PJs are soiled and hard to keep clean. While her language is vile Regan is actually just shy, Her best buddy is Satan who she claims isn't such a bad guy. She can see into your soul and knows your greatest sin, But that's not her only party trick...she can also make her head spin.
ED: Ed's a backstabbing buddy who's sneaky and morbid, His weird sense of humor is often wicked and horrid. His friends called him "Evil" and then it came true, No wonder poor Ed is so lonely and feeling so blue. Now he's a vampire who likes to scare up a quick bite, Chances are if he's hungry you're in for a night full of fright.

A monstrous mash-up of cinematic villains and popular mid-80s stuffed toys, each handmade Cuddle Creeps pillow sports a vile visage illustrated by Nik Holmes. Available now, the first two pillows in the series retail for $35.00 (MSRP) and are approximately 24" tall by 28" wide.
For more information about Cuddle Creeps, visit HorrorDecor.net.