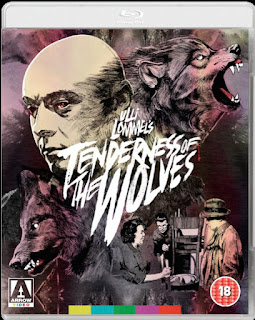 Arrow Video is pleased to announce the release of an almost-forgotten German serial killer drama, based on the true story of Fritz Haarmann aka the Butcher of Hanover and the Vampire of Hanover. Produced by Rainer Werner Fassbinder, directed by Ulli Lommel (The Boogeyman) and featuring a remarkable central performance by Kurt Raab, Tenderness of the Wolves will be released as a dual-format Blu-ray and DVD edition on November 2nd.

Restored by the Rainer Werner Fassbinder Foundation, Tenderness of the Wolves is accompanied by a wealth of new special features, each recorded especially for this release. Ulli Lommel contributes a commentary, introduction and lengthy chat about the film’s making. Cinematographer Jürgen Jürges granted an extremely rare interview to fondly recall his superb work. And actor Rainer Will, who plays one of Haarmann’s young victims, remembers his time on set as a 17-year-old.

Also present is genre authority Stephen Thrower, author of Nightmare USA and Murderous Passions: The Delirious Cinema of Jesús Franco, who provides an exhaustive account of Tenderness of the Wolves’ creation and reception. Rounding off the package are a stills gallery containing rare lobby cards, the German theatrical trailer (also presented in high definition) and a booklet containing new writing by Tony Rayns. The package will also contain a reversible sleeve featuring the original poster and newly commissioned artwork by the Twins of Evil.

Fritz Haarmann was a German serial killer responsible for the murders of two dozen boys and young men during the so-called ‘years of crisis’ between the wars. His case would partly inspire Fritz Lang’s M, and its central character portrayed by Peter Lorre, as well as this forgotten gem from 1973.

Tenderness of the Wolves treats the viewer to a few weeks in the company of a killer. Baby-faced and shaven-headed, in a manner that recalls both M and F.W. Murnau’s Nosferatu, Haarmann is a fascinating, repulsive figure. Using his status as a police informant to procure his victims, he dismembers their bodies after death and sells the flesh to restaurants, dumping the remainder out of sight. This isn’t an easy film to watch, but it certainly gets under the skin…

Produced by Rainer Werner Fassbinder (who also supplies a shifty cameo), Tenderness of the Wolves provided two of his regular actors with a means of expanding their careers. Ulli Lommel – later responsible for the infamous video nasty The Boogeyman – made his directorial debut, while Kurt Raab wrote the screenplay as well as delivering an astonishing performance as Haarmann.