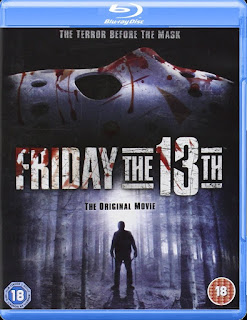 I was recently given the opportunity to review any horror title from the currently available Warner Bros catalogue. So I decided to go with one of the classics and chose their “Friday the 13th” (1980) Blu-Ray.

Now, I’m sure we all know the story. A summer camp, with something of a chequered history, is preparing to re-open its doors for the first time in several decades, after a series of unfortunate events forced it to remain closed.

But as the camp counselors arrive, they soon find that someone, or something, is trying desperately hard to ensure its doors stay shut. As people start disappearing, it seems whatever’s out there will stop at nothing, including murder, to prevent it from re-opening…

Coming out in the wake of John Carpenter’s “Halloween”, Sean Cunningham’s seminal slasher cranked up the tension and upped the gore, to levels unseen before in US and UK cinemas. Setting a whole new standard for imitators to aspire to, producing numerous copycats (ie Madman, The Burning, Sleepaway Camp), along with its own string of sequels.

Cut for its US cinema release (Paramount distributed the film in America), the original UK release from Warner was uncut. But sadly, later video versions used the cut US theatrical version. That all changed in 2003 when Warner released the original uncut version onto UK DVD. The film has since been released uncut onto UK Blu-Ray, so now we can see all the gory throat slashings, axe murders, arrow stabbings and decapitations not only uncut in full, but in glorious high definition.

Featuring special effects by the now legendary Tom Savini (Dawn of the Dead) and starring a very young Kevin Bacon in an early role (who dies a fantastically gory death). The film has lost none of its charm over the years, and is certainly an interesting watch. Even if only to see how the franchise started before Jason showed up with his hockey mask (remember, Jason didn’t become the series villain until part 2)

I chose this title over the others in Warner’s horror collection, as this happens to be a personal favourite of mine. I remember seeing this on video during the early 80s back when I was a kid, and it scared the living daylights out of me.

The BD comes with the following special features.

Audio commentary track with the cast and crew
Return to Crystal Lake - Retrospective making-of feature
Friday the 13th re-union. - Besty Palmer, Adrienne King, Ari Lehman writer Victor Miller, composer Harry Manfredini and SFX man Tom Savini re-uniting for a special screening of the film in 2008.
The Man Behind the Legacy – Sean Cunningham Interview
Lost Tales of Camp Blood – Newly constructed scene, made to look like a deleted scene from the film
Friday the 13th Chronicles – Making of feature, carried over from the old US box set.
Secrets galore, behind the gore – Special effects feature, carried over from the old US box set
Fresh Cuts – A new feature, featuring more recent interviews with the cast and crew, looking back at the making of the film.
And lastly theres the Original UK theatrical trailer

Buy the UK BD from Amazon.co.uk
Other titles in the Warner Horror catalogue include…
THE CLASSICS - TOP PICKS
THE EXORCIST
THE SHINING
NIGHTMARE ON ELM STREET
POLTERGIEST
THE NEW GENERATION OF TERROR - TOP PICKS