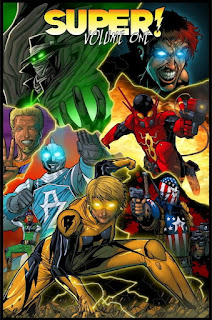 On October 4th, Unlikely Heroes Studios launched a crowdfunding effort to finance the next six issues of "Super!" (6 to 11) and are looking to fund the creation and printing of Volume 2, as well as reprint Volume 1 for new fans. Fire Ant toys, a Super! Art Book, and even a video game - are being offered to sweeten the Kickstarter pot and help reach its goal!   There's also options in the campaign for large and small retailers.  For example, at the $1000 tier - there's an offer of 50 of each volumes, with a custom store stamp on Volume 2.
A successful Kickstarter was run last year to fund printing of Volume 1.  The books flew out of our inventory and into the hands of adoring fans, with reviewers claiming it was "...the kind of comic you want to be reading".  There's been a slight delay in production since then, and people have been crawling on the ceiling asking about Issue 6.  Good news; a release for the issue is planned by the end of 2015.
Volume 2 plans to have some very interesting drama between two of our main characters, as well as expanding on the lore of some of our heroes.  The deeper moments are going to have more weight because we’re more invested in the characters. Delivering the content that you were waiting for, but weren’t aware you were waiting for, but then it’s happening on the page and oh-my-gosh-it’s-so-awesome. That is what Volume 2 is all about!

Because every page of Super!, while entertaining and serving a purpose within its own issue, is leading to big payoffs, and as we start cashing in on those investments, Super! will be hitting at a level that’s rarely seen in American comics.

Visit the Kickstarter Page
Posted by Dark Angel at 15:48